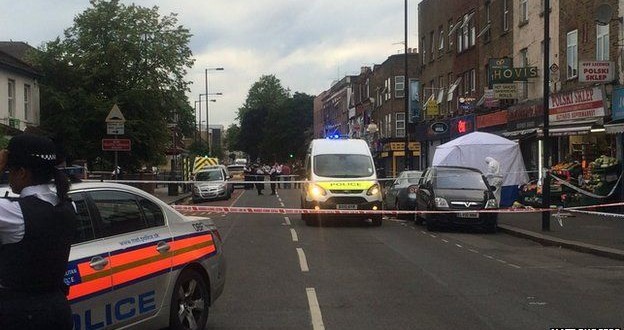 A man shot dead and a woman who was critically injured in a rush-hour shooting in north London were not the intended targets, police believe.

The man, named locally as Erdogan Guzel, 42, and the 51-year-old female were most likely “innocent bystanders”, Scotland Yard said.

A post-mortem examination found Mr Guzel died of a gunshot wound to the chest, while the woman is in a critical but stable condition.

No arrests have yet been made.

A murder investigation was launched after the attack, in Lordship Lane, Wood Green, at about 17:45 BST on Friday.

Family friend Imam Sumbul had previously said Mr Guzel, who would frequently sit outside the Bros Bakery, close to where the shooting occurred, was “in the wrong place at the wrong time”.

“The bullet was not meant for him,” he said.

Another friend, who did not want to be named, said Mr Guzel was a “good guy” and had two teenage children – a son and daughter – who were believed to be abroad on holiday.

The Met are yet to formerly identify Mr Guzel, although a spokesman said his next of kin had been informed.