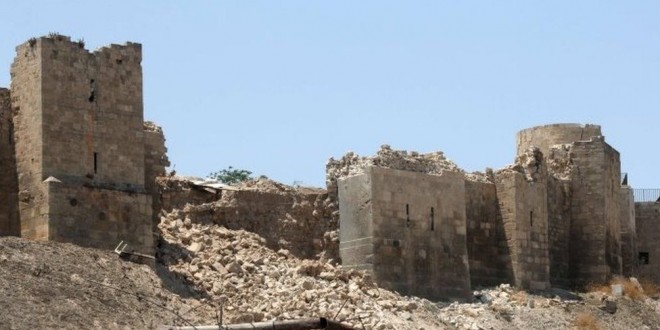 A bomb explosion has caused part of the walls of Aleppo’s ancient citadel to collapse.

Built in the 13th Century, it overlooks Aleppo’s Old City and is part of a UN-listed World Heritage site.

Syrian government forces have been using the citadel as a military position.

Government and rebel forces have been fighting for control of the city for over three years. It is not known which side caused the explosion.

Fighting on the ground and government air strikes have left thousands dead, and destroyed more than 60% of the Old City.

The Syrian Observatory for Human Rights, a UK-based monitoring group, said the explosion occurred in the early hours of Sunday morning.

“The blast caused the collapse of part of the wall of the citadel,” the organisation’s chief, Rami Abdel Rahman, told AFP news agency.

The government says that rebel fighters set off a bomb in a tunnel beneath the citadel.

The use of tunnel bombs has become a common rebel tactic.

Since the start of July, rebel groups have been waging a major offensive against President Bashar al-Assad’s troops in the city.

More than 230,000 people are believed to have been killed in Syria since the uprising against President Assad began in March 2011. Some 11.5 million others – more than half of the country’s population – have fled their homes.