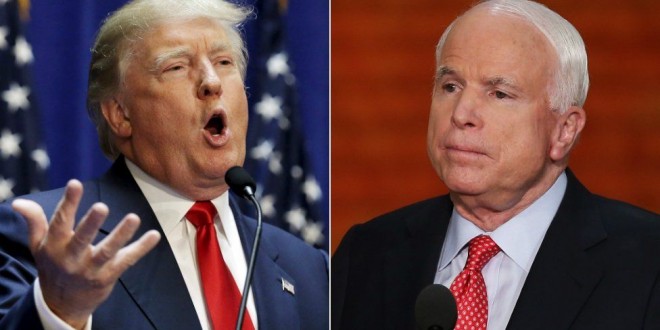 John McCain has urged Donald Trump to apologise to US military veterans after he appeared to question the “war hero” status of captured soldiers.

Mr Trump sparked anger by attacking the military record of Senator McCain, a former prisoner of war, saying: “I like people who weren’t captured.”

The Republican presidential candidate said his remarks were misrepresented and Mr McCain is a “very brave man”.

Rival Republican contenders have hit out at Mr Trump over the comments.

He made them while addressing a gathering of conservatives in Iowa on Saturday when the moderator referred to the Arizona Republican as a war hero.

Mr McCain was held for more than five years after his plane was shot down in Vietnam. Mr Trump avoided military service through student and medical deferments.

“He’s not a war hero,” Mr Trump said to gasps from the audience. “He was a war hero because he was captured. I like people who weren’t captured.”

Meet the US presidential contenders

Mr McCain played down the attack on Monday, telling the MSNBC TV news network: “I think he may owe an apology to the families of those who have sacrificed in conflict and those who have undergone the prison experience in serving our country.”

Mr Trump, who has portrayed himself as an outspoken, outsider Republican candidate, has since tried to reframe his attack on Mr McCain.

Writing in the USA Today newspaper on Monday, he accused the Mr McCain of abandoning the nation’s veterans, making the US less safe, and sending “our brave soldiers into wrong-headed foreign adventures”.

He also lashed out at his Republican rivals, calling them “failed politicians” and saying he did not need “to be lectured by any of them”.

“It’s not just absurd,” Florida Senator Marco Rubio said. “It’s offensive. It’s ridiculous. And I do think it is a disqualifier as commander-in-chief.”

Rick Perry, another Republican candidate, said: “We’re seeing an individual who’s more interested in throwing invectives and this hyperbolic rhetoric out there, rather than laying out solutions.”

There are currently 15 people running to be the Republican presidential candidate.

Mr Trump has led in some early polls, although analysts have predicted his appeal is likely to wane as the contest develops.