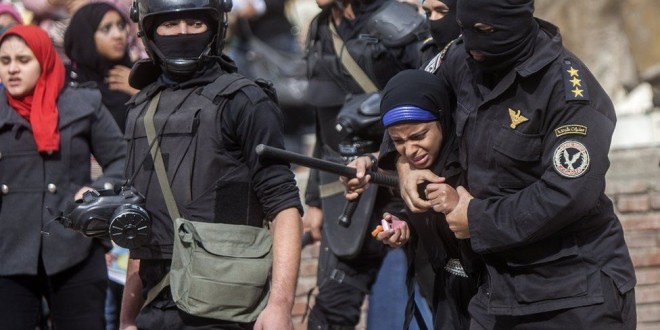 Dozens of people in Egypt have apparently disappeared after being detained secretly by security forces, Human Rights Watch (HRW) has warned.

The US-based group said in some cases state officials either denied holding individuals or refused to reveal their fates.

It called on the authorities to immediately disclose their whereabouts and hold those responsible to account.

If carried out systematically as a matter of policy, they are a crime against humanity.

Hundreds of people have been killed and more than 40,000 believed to have been detained, in a crackdown on dissent, HRW says.

Most were members or supporters of the outlawed Muslim Brotherhood but also secular and liberal activists.

HRW documented the cases of five people “forcibly disappeared” between April 2014 and June 2015, and two most likely to have suffered the same fate.

In three cases, the victims were last seen in the custody of state officials, although the authorities initially denied that the people had been detained or refused to reveal their whereabouts.

In three others, relatives and others who knew the disappeared said security forces had detained them. A doctor who disappeared remains unaccounted for.

The whereabouts of three of the individuals were determined only days or weeks after their disappearances either because state authorities eventually acknowledged their detention or because other people saw them in official custody.

Three university students, Esraa al-Taweel and her two friends Omar Ali and Souhaib Saad, all in their early 20s, were apparently arrested on 1 June as they walked along the River Nile in Cairo’s Maadi district, according to their families.

Three other victims of enforced disappearances were found dead after a period during which their whereabouts were unknown, HRW said.

Al-Sayed al-Rassed, 46, was arrested on 4 June in Banha, the capital of Qalyubia province, by several police in civilian clothes and a Central Security Forces officer and soldiers in uniform, his son Mohamed said.

They did not say where they were taking him. Three days later, his family received a call from the mayor’s office informing them that his body was at a mortuary.

HRW said Egyptian human rights organisations had credibly documented scores of additional cases of enforced disappearances in 2015 and in some from 2013.

In June, Freedom for the Brave, an independent group offering support to detainees, documented what it said were 164 cases of enforced disappearance since April and said that the whereabouts of at least 66 remained unknown.

It listed 64 people whose whereabouts were revealed after more than 24 hours, the maximum time allowed to detain someone without charge under Egyptian law.

Egypt’s interior ministry has not commented on the HRW report but has previously denied carrying out enforced disappearances.

An unnamed senior police official told the AFP news agency in June: “We don’t use these methods. If anyone has proof, they should file a formal complaint.”