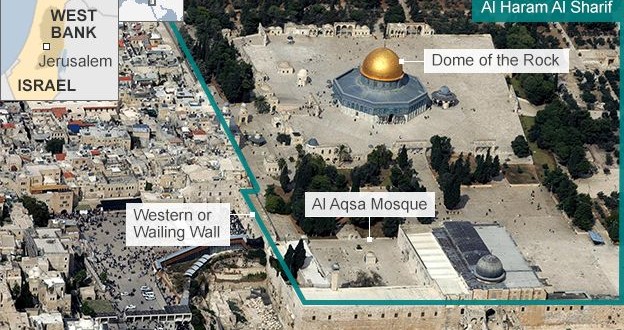 Palestinian youths have clashed with Israeli police who entered the al-Aqsa mosque complex in East Jerusalem.

The Palestinians are said to have barricaded themselves inside the mosque and thrown stones at police, who moved in to stop them.

Israeli media said the Palestinians had intended to disrupt visits by observant Jews to the Western Wall.

The al-Aqsa mosque, one of Islam’s holiest sites, is in a part of East Jerusalem also revered by Jews.

The police said a number of officers were injured. There were no immediate reports of any Palestinian casualties.

“Masked rioters fled into the mosque and started to throw stones and blocks at police from inside al-Aqsa mosque,” a police statement quoted by AFP said.

“They threw fireworks directly at police.

“In light of the severe confrontation and the escalating actions of the rioters and with the aim of preventing further injury to police… forces entered a number of metres inside and closed the doors to the mosque with the rioters inside, restoring order.”