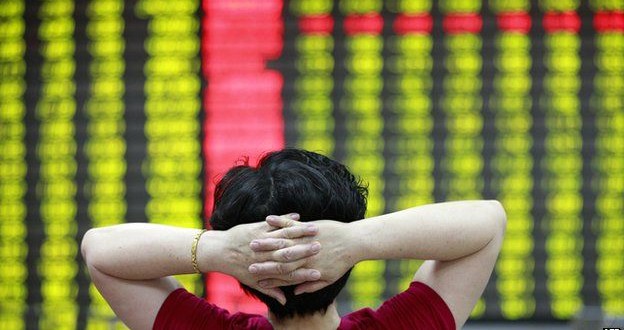 Shares in mainland China have recorded their biggest one-day fall for more than eight years following a sell-off towards the end of the trading day.

The Shanghai Composite closed down 8.5% at 3,725.56 after more weak economic data raised concerns about the health of world’s second largest economy.

Profit at China’s industrial firms dropped 0.3% in June from a year ago.

That followed data on Friday indicating that factory activity in July seen its worse performance for 15 months.

Bernard Aw, market strategist at trading firm IG, said the surprisingly weak manufacturing data “added to worries that there could be further weakness in the Chinese economy, after the patch of recent economic data showed signs of stability”.

The Shanghai market’s fall was the biggest one-day loss since February 2007.

While there was little to explain why shares were being sold at such a level, analysts said fears that China might hold off from further measures to boost the economy had contributed to concerns among investors.

The stock market has been benefitting from a series of support measures from the government and regulators after it lost a third of its value in the three weeks from mid-June.

Chinese shares had recovered about 15% of their value before Monday’s plunge – showing some signs of stabilisation.

But on Monday, stocks fell across the board, including benchmark index heavyweights such as China Unicom, Bank of Communications and PetroChina.

More than 1,500 shares listed in Shanghai and Shenzhen fell by their daily downward limit of 10%.