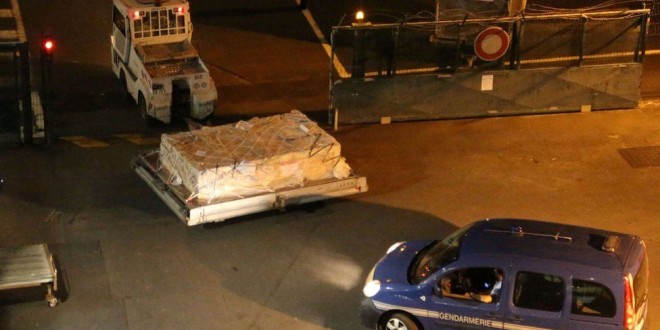 Plane debris flown out of Reunion

A piece of debris that experts believe could be from missing flight MH370 has been flown out of the French island where it was found on Wednesday.

The object, believed to be part of a wing, left Reunion in the Indian Ocean on a flight to Paris on Friday evening.

From there it will be transported to a defence ministry laboratory in Toulouse for analysis.

The Malaysia Airlines Boeing 777 travelling from Kuala Lumpur to Beijing vanished in March 2014.

There were 239 passengers and crew on board.

Since then, an Australian-led search effort has been focused on a vast area of the southern Indian Ocean about 4,000km (2,500 miles) to the east of Reunion.

Experts have said the two-metre (6ft) object washed up on a beach could be a moveable piece of a Boeing 777’s wing, called a flaperon.

The debris, packed into a crate, was loaded aboard a commercial Air France flight in Reunion and is due to land at Paris’s Orly airport at about 06:00 (0400 GMT) on Saturday.

Reunion is a French overseas department to the east of Madagascar.

A team from Malaysia Airlines has already arrived in Toulouse and French officials say analysis of the part should begin on Wednesday.

The military laboratory is expected to verify the serial number of the object and conduct further tests. Fragments of a suitcase found on the same beach are also to be examined.

The centre in Toulouse was also involved in analysing debris from the Air France flight AF447 which crashed on a flight from Brazil to Paris in 2009, killing 228 people.

Location of a flaperon on a Boeing 777

Missing Malaysia plane: What we know

MH370: Behind the tenacious deep-sea hunt for missing plane

Earlier, Martin Dolan, chief commissioner of the Australian Transport Safety Bureau, said the agency was “increasingly confident that this debris is from MH370”.

“There is no other recorded case of a flaperon being lost from a Boeing 777,” Mr Dolan said.

However, he also said the discovery of debris might not help pinpoint where the plane went down.

“Over the last 16 or 17 months, any floating debris would have dispersed quite markedly across the Indian Ocean,” he told AFP news agency.

Authorities believe the plane veered off course – for reasons unknown – and went down in the southern Indian Ocean. Its estimated last location was based on “pings” sent from the plane that were detected by satellite.

However, no physical evidence has been found and in January Malaysian authorities declared that all on board were presumed dead.

Australian officials and Malaysian Prime Minister Najib Razak have said the location of the debris on Reunion was consistent with drift analysis provided to investigators.

Simulation of where debris in search area could end up