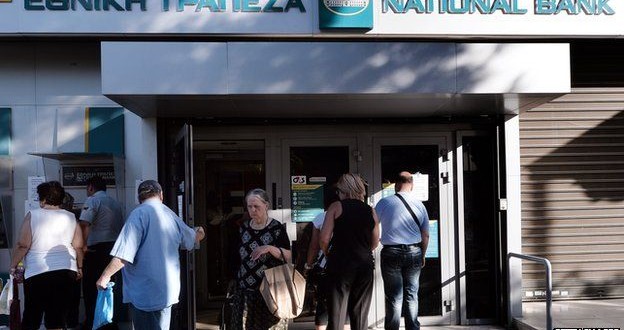 The main Athens stock index, the Athex, has fallen by 22.87% as trading resumes after a five-week closure.

The nation’s top four lenders – Piraeus Bank, National Bank, Alpha Bank, and Eurobank – were biggest fallers, all down by 30%, the maximum allowed. Banks make up about a fifth of the index.

The bourse was shut just before Athens imposed capital controls at the height of the debt crisis.

Traders had predicted sharp losses as a result of pent-up trading.

Markit’s purchasing managers’ index (PMI) for manufacturing, which accounts for about a tenth of the economy, fell to 30.2 points, the lowest reading since records began in 1999. A measure of 50 denotes growth.

Holly Cook, editor of financial website Morningstar.co.uk told the BBC that it was “not really surprising that we’re seeing all this negativity building up”.

She said that the country’s economy faced a potentially long road back to recovery.

“We need to see what’s going to come in the weeks and months ahead,” added Ms Cook.

Constantine Botopoulos, head of the Greek capital markets commission, told Skai radio: “Naturally, pressure is expected, markets will not fail to comment on such an extensive shutdown.”

He added: “But we must not get carried away. We must wait until the end of the week to see how the reopening will begin to be dealt with more coolly.”

Although Greece struck a bailout deal with its creditors last month, political in-fighting in Athens over the conditions could still result in prime minister Alexis Tsipras calling an early election.

The Greek economy has begun to reverse the gains it was making before Mr Tsipras’s Syriza-led coalition took power in January on an anti-austerity platform.

The European Commission expects Greece to go back into recession this year, with the economy contracting by between 2% and 4%.

The Greek economy was in recession for six years until 2014.

Are you in Greece? Are you a trader? What do you think about the fall in the Athens Stock Exchange? You can email [email protected] with your views.