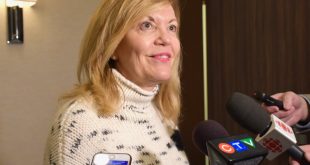 US President Barack Obama has unveiled what he called “the biggest, most important step we have ever taken” in tackling climate change.

The aim of the revised Clean Power Plan is to cut greenhouse gas emissions from US power stations by nearly a third within 15 years.

The measures will place significant emphasis on wind and solar power and other renewable energy sources.

However, opponents in the energy industry have vowed to fight the plan.

“I’m convinced no challenge provides a greater threat to the future of the planet,” Mr Obama said. “There is such a thing as being too late.”

Those opponents say Mr Obama has declared “a war on coal”. Power plants fired by coal provide more than a third of the US electricity supply.

The revised plan will aim to cut carbon emissions from the power sector by 32% by 2030, compared with 2005 levels.

“We are the first generation to feel the impacts of climate change, and the last generation to be able to do something about it,” Mr Obama said. He likened the plan to taking 166 million cars off the road in terms of environmental impact. He called taking a stand against climate change a “moral obligation”.

Mr Obama brushed off the notion that the plan is a “War on Coal” that will kill jobs and said he is reinvesting in areas of the US known as “coal country”.

“Scaremonging” tactics will not work to stop the proposal, he said.

The big question for the president is how to ensure that these carefully crafted rules don’t end up in the recycling bin of history.

The White House believes that by vesting the power to implement these changes in the hands of individual states, they are pulling the rug from Republican claims that this is another Washington imposed, big government boondoggle.

The president is calculating that the courts will uphold the rights of the EPA to regulate carbon emissions under the Clean Air Act, as they have done on a number of occasions in recent years.

He is also gambling that because of the uncertainty of the courts and the long lead time until the regulations bite, many Republican governors will grasp the nettle and accept the changes.

The president sees this plan as the cornerstone of his attempt to secure a global treaty on climate change in Paris at the end of the year. But he needs that conference to succeed almost as much as the beleaguered UN process needs him.

Getting a deal in the French capital may help “save the world” from the worst ravages of climate change. It would also make it very difficult for his successor to unravel the Clean Power Plan.

Each US state will have an emission-cutting goal assigned to it and must submit a proposal to the Environmental Protection Agency on how it will meet the target.

The BBC’s Tom Bateman in Washington says President Obama will hope that Monday’s announcement secures his legacy on climate change.

The measures, our correspondent says, would give the president the moral authority he needs to argue for global reductions in greenhouse gases at a major conference in Paris later this year.

However, several state governors are already saying they will simply ignore the plans.

In face of the criticism, the White House said the release of the plan was “the starting gun for an all-out climate push” by the president and his cabinet.

In a video released by the White House, Mr Obama said the new limits were backed up by decades of data showing that without action the world faced more extreme weather and escalating health problems.

“Climate change is not a problem for another generation. Not any more,” Mr Obama said.

“My administration will release the final version of America’s Clean Power Plan, the biggest, most important step we have ever taken to combat climate change.”

Democratic presidential candidate Hillary Clinton said she would defend the plan if she was elected to replace Mr Obama.

“It will need defending. Because Republican doubters and defeatists – including every Republican candidate for president – won’t offer any credible solution,” she said.

One Republican presidential candidate, Marco Rubio, said the plan would be “catastrophic,” while another, former Florida governor Jeb Bush, said the plan was “irresponsible and over-reaching”.

“The Supreme Court ruled, it’s very clear that the EPA has the authority to regulate greenhouse gas emissions, so regulation is inevitable and I think it’s very irresponsible for the Republican leadership to go out there and say we don’t have any solutions, this is all wrong, we don’t believe in the science, so let’s throw up our hands and do nothing,” Heather Zichal, a former climate and energy adviser to the president and a key architect of the plan told the BBC’s Matt McGrath.

“This will be an issue in the 2016 election and because the Democrats have a far more responsible policy position, it will allow them to prevail.”

Correspondents say the emphasis on renewable energy sources marks a significant shift from the earlier version of the plan that sought to speed up a transition from coal-fired power to natural gas plants, which emit less carbon dioxide.

It is believed the revised plan will aim to keep the share of natural gas in US power generation at current levels.

Power stations are the largest source of greenhouse gases in the US and account for about one third of all such US emissions.