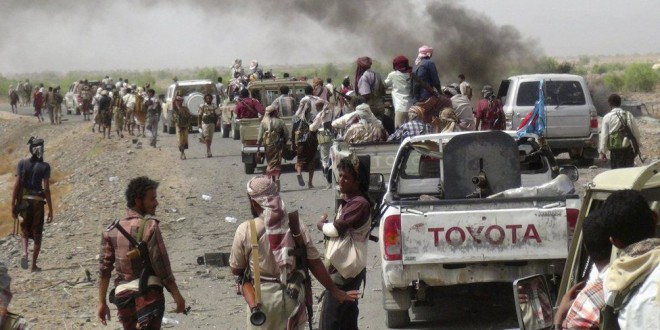 Rebels 'driven from key Yemen base'

Pro-government forces in Yemen have retaken the country’s largest airbase in a battle with Houthi rebels, a spokesman for the forces told the BBC.

Heavy casualties have been reported at al-Anad airbase, north of Aden, after intense fighting there in recent days.

It comes after pro-government forces, backed by air strikes from a Saudi-led coalition, retook Aden in July.

The Saudis are leading a campaign to push the rebels back and restore the government, which it is sheltering.

Al-Anad used to be a base for US troops overseeing drone attacks on al-Qaeda.

It was overrun by Houthi rebels as they advanced south in March, forcing President Abdrabbo Mansour Hadi to flee.

“The al-Anad airbase is now back in the hands of President Hadi’s men,” Nasr Alkaid, a spokesman for the pro-government forces, told the BBC.

He said the loyalists were still battling rebels about 4km (2.5 miles) from the base.

There has been no comment from the Houthis on the latest claims that the base has fallen.

If confirmed, the recapture of the airbase could remove a major obstacle for government forces on the road to Taiz, Yemen’s third-largest city, where pro-Hadi militia have been clashing with rebels.

Pro-government troops have been helped by air cover and weapons provided by the Saudi-led coalition.

Sunni power Saudi Arabia regards the Houthis as proxies of Shia rival Iran. It alleges Iran has provided the Houthis with weapons, something Iran and the Houthis deny.

The rebels – backed by forces loyal to the former President, Ali Abdullah Saleh – say they are fighting against corruption and marginalisation of their northern powerbase by Mr Hadi’s government.