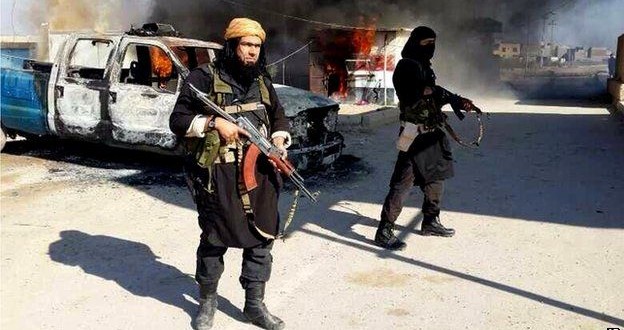 Researchers in the US have used artificial intelligence to better understand the military strategy of Islamic State extremists.

Analysis established a causal link between air strikes and roadside bomb attacks as well as a connection with the jihadists’ use of military tactics.

The algorithmic system analysed 2,200 recorded incidents of IS activity from the second half of 2014.

A paper on the findings will be presented at a conference next week.

One feature they noticed was spikes in the use of improvised explosive devices (IEDs).

Paulo Shakarian, one of the co-authors of the paper and a US army officer who served in Iraq in 2006, told the BBC: “When they experience a lot of air strikes against them they shift away from a large infantry-style operation and use IEDs.”

Researchers also discovered that the use of vehicle-borne bombs increased prior to large infantry operations by the militants. One example of this occurred in Iraq.

“We believe this relationship is because they want to prevent reinforcements from the Iraqi army getting out of Baghdad,” explained Dr Shakarian.

A finding that initially baffled the researchers was sharp increases in arrests by Islamic State following Syrian air strikes.

Dr Shakarian said they now believed that these might be retaliatory attempts to weed out Syrian intelligence agents who might have played a role in the targeting of the strikes.

He added that the tactics of IS differed markedly from those of the enemy forces he faced in Iraq nine years ago.

The extremist group, he said, was more complex and dynamic, which was why the nature of their strategies was not always obvious without computational analysis.

“The military has access to a lot of information,” she said, “They need a way to bring it down to a digestible format. Analytics is definitely the way to do that.”

Noel Sharkey, a computer scientist at the University of Sheffield, added that the approach might help predict likely types of attacks.

“It suggests that [IS] has a predictable operational strategy rather than an arbitrary one, or a new one for each attack,” he commented.

“Of course, the problem is that this could change suddenly and particularly if they noticed that other military forces were acting on their predictability.”

Dr Shakarian will present the paper to delegates of KDD 2015, a conference on data analysis, in Sydney, Australia, next week.