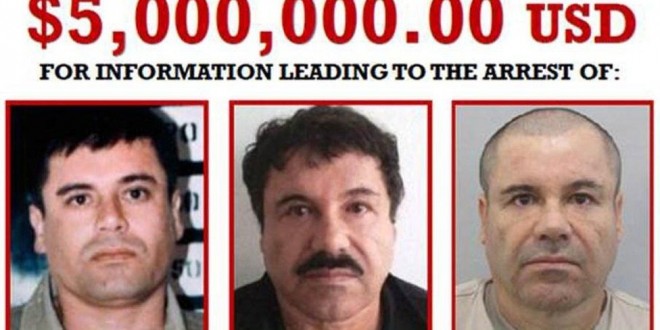 US offers $5m for 'Shorty' Guzman

The US government is offering a reward of $5m (£3.2m) for information leading to the capture of fugitive Mexican drug lord Joaquin “Shorty” Guzman.

Guzman escaped from a Mexican maximum-security jail on 22 July.

He is one of the world’s most wanted drug lords whose Sinaloa cartel smuggled huge quantities of cocaine, heroin and methamphetamines to the US.

The head of the US Drug Enforcement Administration (DEA) said he believed Guzman was still in Mexico.

DEA acting director Chuck Rosenberg told reporters he believed that Guzman was hiding in his home state of Sinaloa, in north-west Mexico.

But he said that was only “an educated guess”.

Shortly after his escape, Mexican authorities announced they were offering a $3.8m reward for information leading to his arrest.

Mr Rosenberg said Mexican and US authorities were working together to catch Guzman.

Guzman, also known as El Chapo, or Shorty, escaped from the Altiplano penitentiary west of Mexico City through a 1.5km-long (1 mile) tunnel.

It is the second time he has escaped from a maximum-security jail.

In 2001, he broke out of Puente Grande jail, reportedly hidden in a laundry cart after bribing officials.

He was on the run until February 2014 when US and Mexican security officials traced him to a flat in Sinaloa state.

He was arrested without a shot being fired.

Guzman’s wealth is estimated at $1bn.