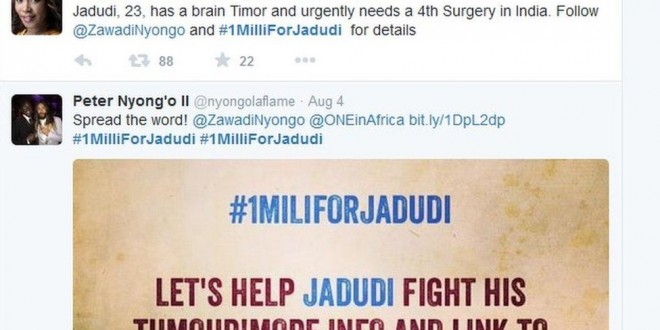 A Kenyan man with a brain tumour has thanked people for donating towards his treatment following a Twitter appeal.

Emmanuel Jadudi tweeted that he was “overwhelmed” and did not know how to thank them for the money raised.

“He doesn’t have much time left. He needs our help to fly out to India for a fourth brain surgery… he needs 1m [Kenyan] shillings [$10,000] by Saturday,” Mr Biko wrote on his blog Bikozulu on Tuesday.

He urged people to donate and spread the message using the hashtag #1MilliForJadudi and gave the details of an M-Pesa account, through which money can be transferred via mobile phones.

Mr Jadudi, who was in his third year at university studying political science and sociology when he was first diagnosed in 2012, tweeted: “I am beyond grateful I’m overwhelmed with joy.”