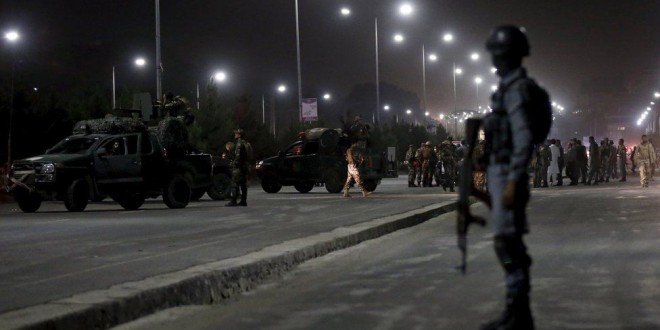 At least 35 people have died and hundreds more have been wounded in separate bomb attacks over the last 24 hours in the Afghan capital Kabul.

A suicide bomber blew himself up near the city’s police academy on Friday evening, killing about 20 recruits.

A short while later a large explosion was heard north of the airport.

In the early hours of Friday, a truck carrying explosives was detonated near an army base in the Shah Shahid area, claiming 15 lives.

The Taliban has claimed only one attack – the suicide bombing of the police academy.

President Ashraf Ghani has suggested that the group is seeking to divert attention away from its leadership struggles.

Officials said Friday evening’s suicide bomber was dressed in police uniform when he detonated an explosives-laden vest outside the gates of Kabul’s police academy.

He had stood among a queue of police cadets who were waiting to enter the building having returned from their two-day weekend, officials said.

At least 25 cadets were wounded.

“It was huge, all the victims are military students,” said one local resident. “They were all students of the academy.”

Observers say the attack on the police academy marks a serious breach of security in an already heavily-fortified city.

Just two hours after this attack, a loud explosion was heard across much of the city followed by sustained gunfire, the BBC’s Philip Palmer reports from the Afghan capital.

Police said the attack was to the north of the airport, close to an area housing several Nato and Afghan military bases and training facilities.

The truck bomb, which went off in the early hours of Friday in the largely residential Shah Shahid area, caused one of the largest explosions the city has ever experienced.

It flattened buildings, damaged cars and left a 10m (30ft) crater in the road.

At least 240 people – mostly civilians – were wounded. The injured, including women and children, were rushed to hospital for treatment, and some bodies were feared buried in the wreckage of shops and businesses.

These attacks – along with Thursday’s suicide bombing in eastern Afghanistan that killed six people – are the first major incidents since the Taliban confirmed last week that its leader, Mullah Omar, was dead.

On Monday the Afghan Taliban released a video which they said showed members of the group pledging allegiance to the new leader, Mullah Akhtar Mansour.

But there is speculation of a power struggle and violent infighting within the military group, between supporters and opponents of Mansour.

Such infighting has led to fears for fragile peace talks between the Taliban and the Afghan government, aimed at ending the long-running violence.

Are you in Kabul? Did you see or hear the explosion?Let us know about your experiences. Email [email protected] with your stories.