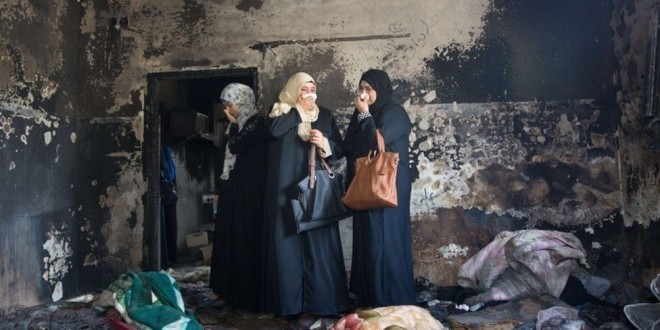 A Palestinian man whose child was killed in an arson attack blamed on Jewish settlers has died of his injuries.

Saad Dawabsha, 32, died in an Israeli hospital where he was being treated for second-degree burns to most of his body.

His son Ali, 18 months, died in the attack in the village of Duma in the occupied West Bank on 31 July.

His mother and his four-year-old brother remain in critical condition.

Relatives said the funeral would take place on Saturday.

The family’s small home was firebombed in the night, and daubed with slogans in Hebrew, including the word “revenge”.

Israeli Prime Minister Benjamin Netanyahu called the attack an act of terrorism. Israel has vowed to catch the arsonists.

The incident may have been a so-called “price tag” attack.

Such attacks usually involve acts of vandalism or arson by Jewish extremists as retribution for actions taken by the Israeli government against Jewish settlements or unauthorised outposts in the West Bank, or for violence by Palestinians.

Palestinians regard settlements as a major obstacle to building a sought-after state in contiguous territory in the West Bank and East Jerusalem.

About 500,000 Jews live in more than 100 settlements built since Israel’s 1967 occupation of the West Bank and East Jerusalem. The settlements are considered illegal under international law, though Israel disputes this.