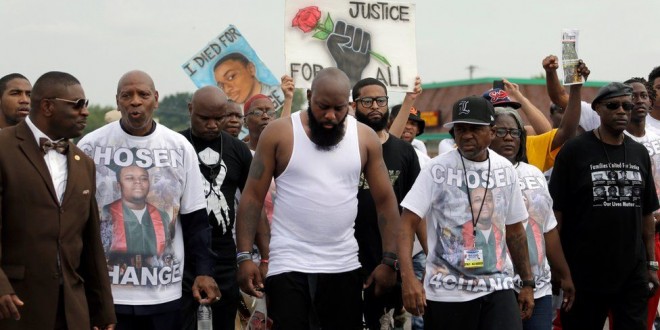 The US town of Ferguson is marking the first anniversary of the killing of unarmed black teenager Michael Brown.

On the eve of Sunday’s anniversary, several hundred marched through the town in his honour, led by his father.

The shooting of the 18-year-old by white police officer Darren Wilson sparked demonstrations across America.

Along with killings of unarmed black men elsewhere in the US, it also fuelled a national protest movement against racial bias by the police.

Activists and religious figures from across the country are among those who have gathered this weekend in Ferguson, a suburb of St Louis, Missouri.

Mr Brown’s father, also called Michael, said: “Some families got justice through Michael Brown’s legacy, and that helped them. But I’m still trying to get through.”

On Sunday, a march is planned from the site of the shooting to a local church.

Participants are expected to observe a 4.5 minute silence to reflect the approximately four-and-a-half hours that Mr Brown’s body lay in the street.

The protests, which sometimes involved violent clashes between demonstrators and police, continued in Ferguson for weeks after the killing.

The protest movement gained fresh impetus in November, when a grand jury decided not to charge Mr Wilson.

Mr Wilson, who argued that he was acting in self-defence, resigned from the police force in November.

The report led to several high profile resignations, including the chief of police.

of people arrested are African Americans, whereas only:

of Ferguson population is black

The “Black Lives Matter” movement that emerged in the wake of Mr Brown’s death has focused attention on the troubled relationship between black communities and police forces in a number of US states.

Another police shooting of an unarmed black man took place on Friday.

College football player Christian Taylor, 19, was shot dead after police were called to a possible burglary at a car dealership in Arlington, Texas.

Officer Brad Miller, who had never before fired his weapon in the line of duty, has been placed on administrative leave.

Within a roughly 30-metre radius of Michael’s grave there are at least 15 homicide victims. The youngest was a 15-year-old. Most of them were shot. There are also deaths by suicide, cancer, car accidents, but for those under the age of 30, the predominant cause of death is homicide.