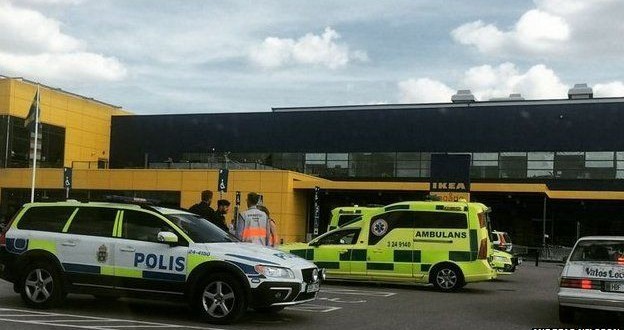 Two people have been killed and another seriously injured in a knife attack at an Ikea store in Vasteras in Sweden, according to police.

The dead are a man and a woman, police said in a statement. A man has been arrested on suspicion of murder.

Ikea spokeswoman Anna Pilkrona-Godden said that the Erikslund shopping centre containing the store had been closed.

The injured victim is a man of about 35, Swedish television reported, citing eyewitnesses.

“He was brought in from the site of the incident with life-threatening injuries,” Lena Moren, the head duty nurse at Vasteras hospital, told the SVT public broadcaster.

Police said in a statement: “We found a man and a woman who had knife injuries and who later died of their wounds.”

Several ambulances were at the scene and the area was cordoned off by police, eyewitnesses said.

“Our thoughts are with those affected,” said Mrs Pilkrona-Godden.

The Ikea store in Vasteras, which is about 70 miles (115km) west of the capital Stockholm, is one of the largest in the country.

Are you in Vasteras? Have you witnessed anything? Please stay safe and let us know about your experiences by emailing [email protected].