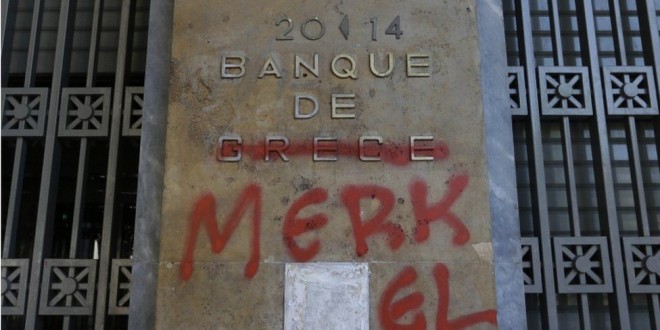 The Greek debt crisis has saved the German government some €100bn (£70bn; $109bn) in lower borrowing costs because investors have sought safety in German bonds, a study has found.

Even if Greece defaults on all its debt, Germany would still benefit, says the German IWH institute.

Greece is hoping to reach a third bailout agreement, worth up to €86bn, with its creditors this week.

Germany has funded €90bn so far and wants tough conditions for a new deal.

Greece missed two key payments to the International Monetary Fund in June and July, before a deal on a bridging loan was thrashed out by EU leaders.

The terms of the third bailout need to be reached by 20 August, when Greece’s next debt repayment to the European Central Bank becomes due.

Greek officials said negotiations were in the “final stretch”, prompting shares in Athens to jump more than 2%. But leading figures in Berlin were cautious that a final deal was close.

German officials are keen for Greece to sign up to credible pension reforms and privatisation plans, while the Athens government is looking for urgent funding to recapitalise the country’s ailing banks.

Any deal will have to be ratified by German MPs, many of whom object to handing more funding to the left-wing Syriza government of Alexis Tsipras.

However, the study by Halle Institute for Economic Research said Germany had made interest savings of more than 3% of GDP between 2010 and 2015, and much of that was down to the Greek debt crisis.

Greece sought its first EU-IMF bailout in 2010 and Germany provided funding over the past five years either directly or through the IMF or the European Stability Mechanism.

The IWH study says every time this year there was a spike in the Greek debt crisis, which made Greece’s exit from the euro appear more likely, German government bond yields fell. Whenever the news looked better, Germany’s bond yields increased.

Even if the situation were to calm down suddenly, Germany would still be expected to profit from the situation, the IWH argues, because medium- and long-term bonds issued in recent years are still far away from maturing.