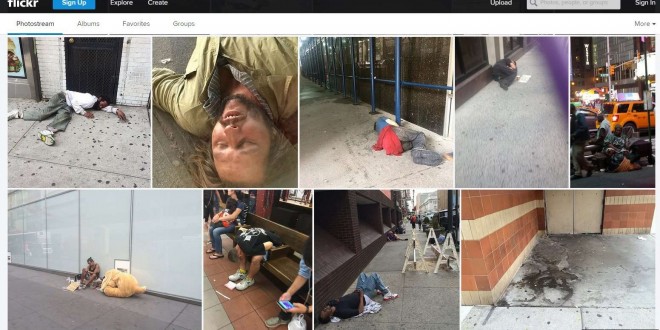 New York’s police union is encouraging its members to take photos of homeless people to bring attention to what they view as an increase in “quality-of-life offences” in the city.

But some say the tactic amounts to shaming the city’s poorest residents.

The union launched a Flickr album this week featuring the first photos from its members.

The union is a frequent critic of the New York Mayor Bill de Blasio, who has called for less aggressive policing.

After years of declines, New York has seen increases in murders and other crimes in the past year.

The city’s homeless population has also risen in recent years. City officials estimated that there were about 75,000 homeless people in New York this year, up from about 67,000 the year before.

“As you travel about the city of New York, please utilize your smartphones to photograph the homeless lying in our streets, aggressive panhandlers, people urinating in public or engaging in open-air drug activity, and quality-of-life offences of every type,” Sergeants Benevolent Association President Ed Mullins wrote in a letter obtained by the New York Post.

New York police leadership have long been proponents of the “broken windows” philosophy of policing.

“Broken windows” calls for aggressive enforcement of small crimes like panhandling and vandalism, arguing they lead to more serious offences.

However, some of these tactics have been criticised as racially biased and Mr de Blasio has pressed for reforms.

Police officers are prohibited from taking photos of people while on the job, but the union is encouraging picture-taking while off-duty.

The union is also soliciting photos from the families and friends of members.