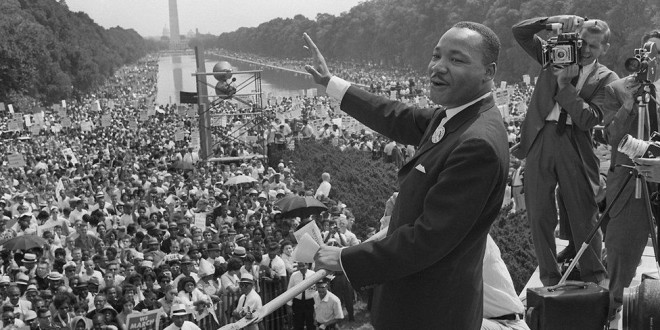 A recording of an earlier version of Martin Luther King’s historic I Have a Dream speech, delivered to high school students in 1962, has been discovered.

King gave the 55-minute address months before he spoke before thousands at Washington DC’s Lincoln Memorial.

In it, the civil rights leader repeated the soon-to-be iconic phrase “I have a dream” eight times.

The tape, discovered by an English professor, is believed to be the first ever recording of the speech.

It was unveiled by North Carolina State University earlier this week, where the professor – Jason Miller – is based.

Martin Luther King’s speech to some 2,000 high school students in Rocky Mount was reported by the press at the time, but an audio recording of the event was never known to exist.

But Mr Miller stumbled across it while conducting research on King at a local library earlier this year, after reading about a transcript of the speech and making some calls to try to locate a recording.

A reel-to-reel copy on acetate tape “mysteriously appeared” in Braswell Library toward the end of 2013, inside a box that had the words “Please Do Not Erase” written on it, the News Observer reports.

Mr Miller brought in an expert to verify the tape, then got it restored and transformed to digital format so that it could be heard. The university played the recording to the public on Tuesday. The entire speech is due to be made available online later this year.

Herbert Tillman, a student at the time of King’s first speech at his school in Rocky Mount, said the room was full of people.

“Everything was full. Everyone was attentive, and Martin Luther King had always been a great speaker. The words he brought to Rocky Mount were words of encouragement we really needed,” he told the News Observer.

King’s speech is considered by many to be one of the most recognisable speeches of all time.

He famously went off script after being heckled by his friend, Mahalia Jackson, who shouted “Tell ’em about the dream, Martin”.

She was referring to the rhetorical riff he had already used several times – including at the high school – but had no intention of using until that point.