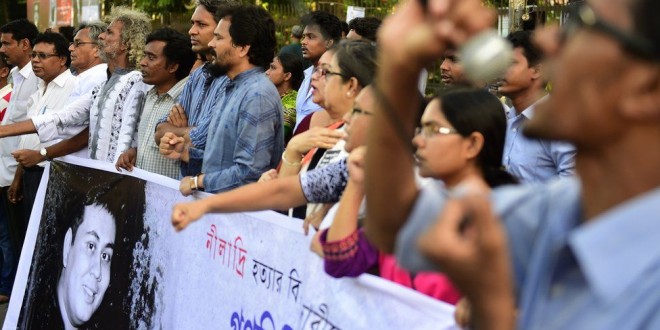 Bangladesh police say they have arrested two suspected members of a banned Islamist group over the killing of atheist blogger Niloy Neel.

The two men were suspected members of Ansarullah Bangla Team, a militant group accused of links to previous attacks on bloggers, police said.

Mr Neel was hacked to death by a gang armed with machetes at his home in the capital Dhaka last week.

It was the fourth such killing of a secular blogger this year.

Mr Neel’s attackers had tricked their way into his home by saying they were looking to rent a flat.

Bangladesh is officially secular but critics say the government is indifferent to attacks on bloggers by Islamist militants.

In May, secular blogger Ananta Bijoy Das was killed by masked men with machetes in Sylhet. He was said to have received death threats from Islamist extremists.

In March, another blogger, Washiqur Rahman, was hacked to death in Dhaka. Blogger Avijit Roy, who courted controversy by championing atheism and also tackling issues such as homosexuality, was killed in Dhaka in February.