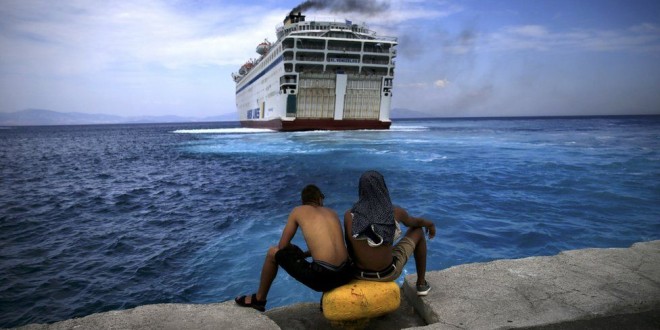 A passenger ship has docked at the Greek island of Kos to be used as a registration centre and accommodation for migrants and refugees.

The vessel could provide temporary shelter for up to 2,500 people.

Greek authorities hope it will help them cope with the influx of migrants – many of them Syrian refugees – who have arrived on the island.

Clashes broke out this week as police tried to contain people being held inside a football stadium.

More police have been drafted in and efforts are being made to speed up the registration process to try to prevent stop further unrest.

Correspondents say the Greek government is calling the ferry a reception facility, but critics view it as a detention facility.

The Eleftherios Venizelos will be the place where migrants can apply for the documents they need to travel to other parts of Europe.

Thousands of migrants have arrived this year on Kos, an island with a population of just 33,000.

EU Migration Commissioner Dimitris Avramopoulos said in a statement on Friday that the world was facing the “worst refugee crisis since the Second World War.”

He announced that Greece would soon receive a first tranche of €30m (£21m; $33.4m) from funds made available to help EU states cope with the crisis.

“Greece needs our support in terms of means, or funding, of expertise,” he told the BBC following his statement in Brussels.

The United Nations refugee agency (UNHCR) says at least 124,000 people reached Greece’s shores by sea in the first seven months of 2015 – more than seven times as many as during the same period in 2014.

Nearly all the new arrivals in Greece are refugees fleeing the wars in Syria, Iraq and Afghanistan, it says.

The International Organization for Migration (IOM) says almost 34,500 migrants and refugees arrived in the Dodecanese – the group of islands which includes Kos – between January and July this year.

Meanwhile more than 61,600 have arrived on the northern Aegean island of Lesbos and 21,900 on nearby Chios.

The IOM said Turkish efforts to stop traffickers from sending large “ghost ships” crammed with migrants towards Italy has sparked the surge in arrivals in Greece.

More than 225,000 refugees and other migrants have arrived in Europe after crossing the Mediterranean so far this year, according to the UNHCR. About 2,100 are estimated to have died or gone missing on the journey.

The effects of the crisis have been felt from the shores of Italy and Greece to the northern French port of Calais, which is linked by the Channel Tunnel to the UK.

The campaign group says around 1,500 people – including women and children – are sleeping in the open air at the Traiskirchen centre, with insufficient medical care.

Austria’s interior ministry says it is trying to improve the situation, but that not enough people are being transferred to regional centres.