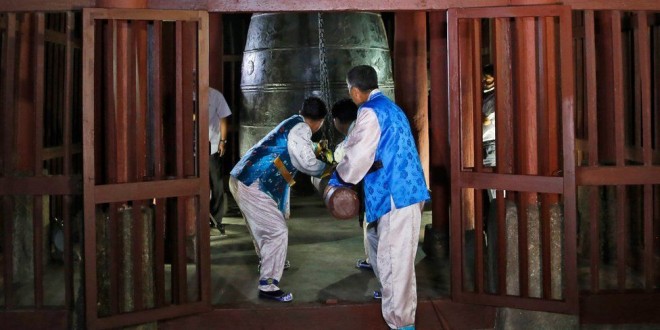 North Korea goes back in time

North Korea has switched to a new time zone, turning its clocks back by 30 minutes to mark its liberation from the Japanese at the end of WW2.

Bells rang out in the capital Pyongyang at midnight on Friday as the new time zone came into effect.

The North had been nine hours ahead of GMT – like South Korea and Japan.

But before being colonised by Japan in 1910, the entire Korean peninsula – then one country – was 8.5 hours ahead of GMT.

North Korea’s chief astronomer Jong Sok said changing time zones made a lot of sense – and was appropriate as the country marked 70 years since it was liberated from Japanese rule.

“With the time standard that we have used up until now, the time when the sun is at its highest position is not correctly noon,” he told the Associated Press.

State news agency KCNA said earlier this week “wicked Japanese imperialists” had “deprived Korea of even its standard time” by changing the clocks during the occupation.

South Korean president Park Geun-hye said on Monday Pyongyang’s “unilateral” decision, taken without any consultation with Seoul, was “highly regrettable” and threatened a “further deepening of disparity between the two Koreas”.