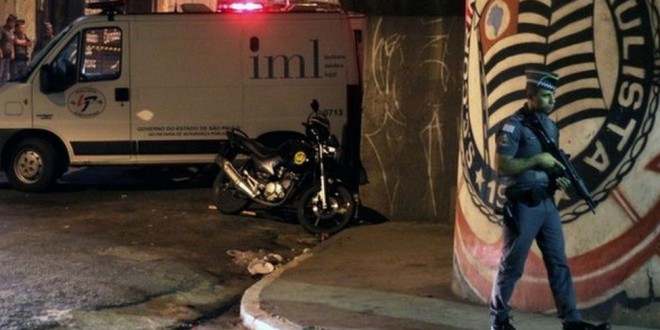 Gunmen have killed at least 18 people on the outskirts of Brazil’s largest city, Sao Paulo, in a series of overnight attacks.

Witnesses in several locations said masked gunmen pulled up in a car before opening fire.

In many cases they checked the victims’ names before shooting, or asked if they had criminal records.

The authorities in Sao Paulo are investigating the possibility that they were targeted killings.

The killings have all the hallmarks of revenge attacks – perhaps carried out by off-duty policemen or vigilantes – against drugs traffickers or known criminals, says the BBC’s Wyre Davies.

Two policemen were killed in the city last week.

Police say the number of victims is much higher than in previous incidents.

The attacks happened in the municipal areas of Osasco and Barueri.

At least six other people were injured in the shootings.

The authorities initially said 20 people had been killed, but the numbers have been revised down.

Video footage shows masked gunmen pulling up in a car and opening fire in a bar in Osasco. Ten people were killed there.

“We don’t rule out any possibility.”

A task force of 50 police officers has been set up to investigate the attacks.

In May, a policeman and a former policeman were arrested in connection with the murder of eight men at a football fan club in Sao Paulo.

The former policeman was accused of ordering the attack against supporters of the Corinthians football club.

They were preparing banners ahead of a match in April when gunmen burst in.