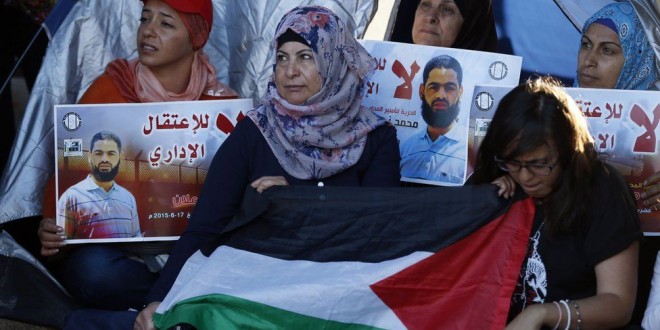 A Palestinian held without charge by Israel has lost consciousness after nearly two months on hunger strike in protest at his detention.

Mohammed Allan, an alleged activist for the Islamic Jihad militant group, was on a respirator and was being given fluids, an Israeli hospital said.

His case is being seen as a test of a recent Israeli law authorising the force-feeding of hunger strikers.

Israeli doctors are challenging the law, which they say is unethical.

The Israeli Medical Association has described force-feeding as tantamount to torture and a violation of a patient’s rights. It has urged doctors to refuse orders to perform the procedure.

Supporters of the law say force-feeding is necessary to save prisoners from death, and to discourage them from using hunger strikes as a tactic to end – or draw attention – to their detention.

It is not yet known if Mr Allan will be subjected to the controversial procedure, in which doctors forcibly insert a tube into the empty stomach. The decision could depend on his medical condition.

A statement from the Barzilai hospital, where Mr Allan is being treated, said his condition had deteriorated on Friday morning but remained stable.

“The treatment is being administered according the ethics committee guidelines and includes respiration and intravenous fluids and saline,” a hospital statement said.

Jamil al-Khatib, a lawyer for Mr Allan, told the AFP news agency that he had heard his client had gone into a coma and that Israeli authorities were planning to force-feed him.

However, an Arab-Israeli MP, Osama Saadi, told the Associated Press news agency that Mr Allan was not being force-fed and was not in coma.

Mr Allan has been held without charge since November.