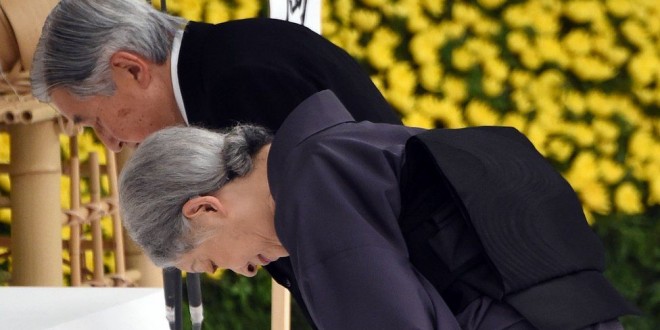 He was speaking at a ceremony to mark 70 years since his country surrendered.

PM Shinzo Abe said Japanese service personnel who died had “sacrificed their futures”, but China and South Korea have accused him of failing to properly atone for Japan’s aggression.

A service was also held at the US naval base of Pearl Harbor, where the conflict began in the Pacific.

More than 2,000 people were killed in the surprise Japanese attack in 1941, which drew the US into the war.

Members of the US Navy and dignitaries from the US and Japan laid wreaths and unveiled a new plaque at the scene.

Demonstrations were held in North and South Korea.

North Korea staged marches and rallies in the Demilitarized Zone with South Korea, while in the southern capital Seoul protesters burned pictures of Mr Abe outside the Japanese embassy.

At the memorial service in Tokyo on Saturday, Mr Abe and Emperor Akihito observed a minute’s silence.

Emperor Akihito struck a more apologetic tone than Mr Abe, with an expression of remorse for the nation’s wartime aggression.

“I attend this memorial ceremony with a deep and renewed sense of sorrow… I earnestly hope that the ravages of war will never be repeated,” he added.

The prime minister said the country would “always reflect the past and hate the horror of the war”.

But in a statement on Friday he stopped short of issuing a fresh apology to the victims of Japanese aggression, angering South Korea and China.

He said that future generations should not be “predestined to apologise” for their country’s wartime actions.

Speaking on Saturday at a ceremony in Seoul, Ms Park called on Mr Abe to reiterate Japan’s apologies for abuses during its wartime occupations of neighbouring countries.

“History can never be covered up. History remains alive through its witnesses’ vivid testimony,” she said.

This day is always controversial and still divides Japan, even 70 years after the war.

Many people have different views over what happened during WW2 and about Japan’s defeat.

At the Yasukuni shrine, where Japan commemorates its war dead, thousands of people have been coming to pray.

But also enshrined here are the souls of 12 Class A war criminals; essentially the men who led Japan during the war.

This place is therefore deeply controversial. We have seen nationalists, right wing and paramilitary groups marching in, bowing and praying – not just for the war dead about for the war criminals who they consider to be martyrs.

Why are Japan’s apologies forgotten?

Why is Japan’s WW2 surrender still a sensitive subject?

Japan’s surrender to the allies on 15 August 1945 freed the then-unified Korea from 35 years of occupation, leading Koreans to celebrate the date as Liberation Day.

Ms Park also called on Japan to resolve, “at the earliest possible date”, the issue of so-called “comfort women” – Asian women forced to work as sex slaves for the military in Japanese wartime brothels.

A spokeswoman for the Chinese foreign ministry said on Saturday that Japan should have made a “sincere apology to the people of victim countries … rather than being evasive on this major issue of principle”.

Mr Abe did not visit Japan’s controversial Yasukuni war shrine this year, as he has in previous years, although there were commemorations at the site.

The shrine has been criticised by China and South Korea because along with Japan’s war dead it honours leaders who were later convicted of war crimes.

They include General Hideki Tojo, who authorised the attack on Pearl Harbor and drew the US in to the war.

In North Korea, clocks were set back 30 minutes on Saturday to so-called Pyongyang time to remove the country from a shared timezone established under Japanese colonial rule.

A commentary by South Korea’s Yonhap News Agency said that Mr Abe’s statement was a “huge step backwards” in comparison with the statements of the predecessors.

A report by North Korean state-run news agency KCNA quoted an unnamed foreign ministry spokesperson as saying that “with no word of apology or remorse”, Japan is “not yet liquidating its heinous crimes” and that was “an unbearable mockery of the Korean people”.