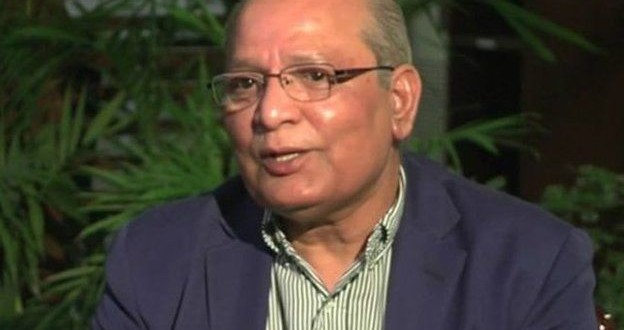 Pakistani minister Mushahidullah Khan has resigned after giving an interview to BBC Urdu in which he accused a former intelligence chief of having plotted against the country’s leaders.

A military spokesman said the allegations were “totally baseless”.

The allegations date back to last year’s street protests against the government, led by the opposition Tehreek-e-Insaaf party and cleric Tahirul Qadri.

Mr Khan – who served as climate change minister – said that at that time, the then head of the ISI, Lt Gen Zaheerul Islam had spoken about a plot to unseat the country’s military and civilian leadership.

Mr Khan said a recording existed of Gen Islam inciting protesters to cause chaos and attack the residence of Prime Minister Nawaz Sharif.

He said that Mr Sharif had played the recording during a meeting with army chief Gen Raheel Sharif.

Information Minister Pervez Rashid flatly denied this. “No such thing ever happened,” he said. “No tape was listened to or played,” he added.

This is not the first time that such claims have been made about the ISI, says the BBC’s M Ilyas Khan in Islamabad.

Earlier this year, Defence Minister Khawaja Asif also accused Gen Islam of plotting against the government, although he was not reprimanded for his comments.

A former army brigadier associated with the Tehreek-e-Insaaf party has also said that Gen Islam had conspired to topple the prime minister and the head of the army.

Relations between Pakistan’s civilian governments and the military have often been tumultuous, with three coups since independence.