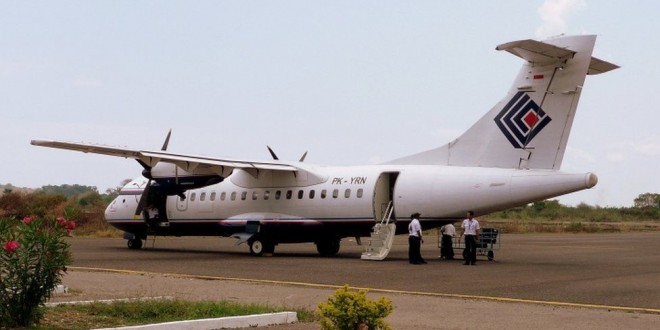 The wreckage of an Indonesian plane carrying 54 people has been found in the remote western Papua region, officials say.

The Trigana Air flight lost contact with ground control at 14:55 local time (05:55 GMT) as it flew from the capital Jayapura to the town of Oksibil.

A transport official said the aircraft had been found in the Bintang highlands region, not far from its intended landing site at Oksibil airport.

It is not yet known if anyone survived.

The wreckage was discovered by villagers, who then alerted officials.

It took off from Sentani airport in Jayapura at 14:21, but lost contact with air traffic controllers half an hour later.

An official search was suspended due to poor light.

Oksibil, which is about 280km (175 miles) south of Jayapura, is a remote, mountainous region, which is extremely difficult to navigate.

Bad weather is believed to have been a possible reason for the crash.

A second plane, which had been sent to look for the missing one, was forced to turn back because of dangerous flying conditions.

Trigana Air has had 14 serious incidents since it began operations in 1991, losing 10 aircraft in the process, according to the Aviation Safety Network.

It has been on a European Union blacklist of banned carriers since 2007. All but four of Indonesia’s certified airlines are on the list.

Indonesia has suffered two major air disasters in the past year.

Last December an AirAsia plane crashed in the Java Sea, killing all 192 people on board – and in July a military transport plane crashed in a residential area of Medan, Sumatra claiming 140 lives.

Have you been affected by this story? You can share your comments by emailing [email protected].