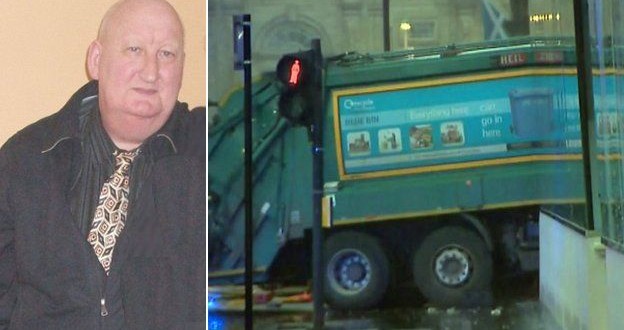 Families of those who lost relatives in the Glasgow bin lorry crash are split over whether there should be a pause to the inquiry to allow for a possible private prosecution of the driver.

The inquiry has heard that the driver Harry Clarke also supported moves to have proceedings adjourned while a decision on legal action is made.

The Crown Office and at least one bereaved family opposes an adjournment.

The inquiry is looking at Mr Clarke’s health, the bin lorry and its route.

Six people died and 15 others were injured when the Glasgow City Council bin lorry veered out of control on Queen Street on 22 December last year before crashing into the Millennium Hotel in George Square.

The fatal accident inquiry (FAI), at Glasgow Sheriff Court, has previously heard that Mr Clarke was unconscious at the wheel during the incident.

The inquiry has also heard that Mr Clarke suffered a previous blackout in 2010 at the wheel of a bus, while employed as a driver for First Bus.

The FAI was also told that he lied about the circumstances surrounding the 2010 blackout in his council application form, subsequent health assessments and in dealings with the Driver and Vehicle Licensing Agency (DVLA).

Scotland’s Crown Office stated in February that it would not bring criminal proceedings against Mr Clarke over the tragedy, which it said was a tragic accident.

The Crown Office later clarified at the inquiry that this decision stood, even after it had emerged at the FAI that Mr Clarke may have lied about the state of his health to obtain driving jobs.

Some families have been highly-critical of the decision not to prosecute Mr Clarke and have said they may pursue a private prosecution against him.