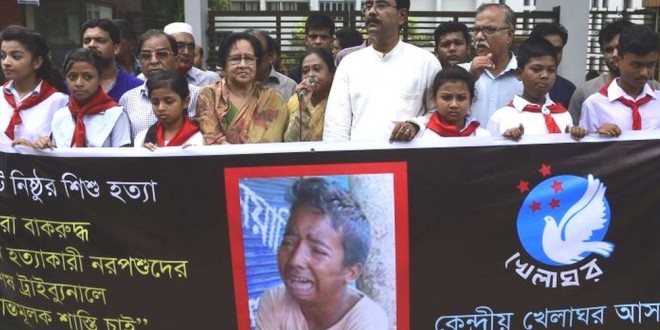 Police in Bangladesh have filed charges against 13 men who allegedly filmed themselves laughing and jeering as they beat a teenage boy to death.

The charges were filed on Sunday in the northern city of Sylhet.

Samiul Alam Rajon was attacked last month after the men allegedly accused him of stealing a bicycle rickshaw van.

One of the attackers allegedly filmed the assault on his mobile phone. The footage showed the boy being tied to a pole and hit repeatedly with a rod.

The video, which was posted on the internet, showed the boy pleading for his life and crying for water, and screaming: “Please don’t beat me like this, I will die.”

An autopsy found that the 13-year-old had 64 separate injuries.

While suspected thieves are often attacked by mobs in Bangladesh, the brutality of this particular attack caused widespread outrage and led to police forming a special squad to investigate the killing.

Ten men have been arrested in Bangladesh since the 8 July attack and have confessed their roles in the crime, Detective Suronjit Talukder told the AFP news agency.

Another three who fled Sylhet have also been charged in absentia with murder.

They include Kamrul Islam, described by the Daily Star newspaper as the prime suspect in the case.

He was arrested in Saudi Arabia after officials there were reported to have been tipped off by members of the country’s large expatriate Bangladeshi community.

A foreign ministry official said he hoped the charges would now lead to Saudi Arabia speeding up his repatriation, although so far it has yet to specify when exactly this will happen.

Thousands of people demonstrated in Sylhet and other parts of the Bangladesh over the killing. A Twitter page in Samiul Alam Rajon’s honour has been set up.

The dead boy’s father, Sheikh Azizur Rahman has said that he will not rest “until the culprits get proper punishment”.

Samiul Alam Rajon’s family say he was falsely accused to theft, and police say they found no evidence he stole the bicycle, AFP reported.