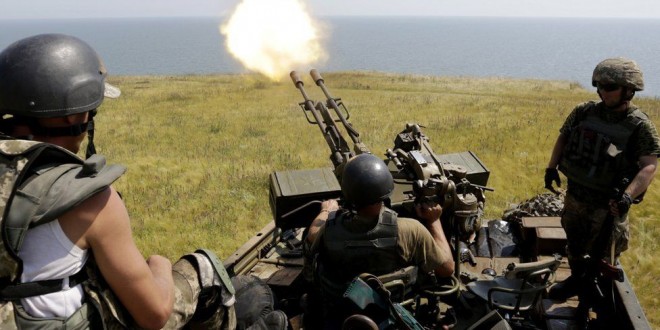 At least nine people have died in heavy exchanges of artillery fire between Ukrainian government forces and pro-Russian rebels in eastern Ukraine.

Russia said the latest fighting suggested preparations for a new offensive by the Ukrainians.

But Kiev accused the rebels of shelling the outskirts of Mariupol – a key port city – from 12km (7.4 miles) away.

He said it would be “dangerous” for ethnic groups to seek special status, seen as a reference to the Tatars who make up about 10% of Crimea’s population and largely opposed the takeover.

Mr Putin also alleged that Ukraine’s government was “under external control, with key positions in the government and regions filled by foreign citizens”.

The former Georgian president, Mikheil Saakashvili, has been appointed as governor of Odessa while three government ministers are foreign-born.

The latest escalation in eastern Ukraine has left the ceasefire signed in February looking more fragile than ever.

Among the dead were seven civilians and two government soldiers, reports said.

Kiev, Western governments and Nato say there is clear evidence of Russian regular troops helping the separatists and arming them with heavy weapons – something Moscow denies.

Sartana and Lebedynske – villages on the eastern outskirts of Mariupol – came under heavy rebel fire, the Kiev authorities said.

They said two Ukrainian troops and two civilians were killed by the rebel shelling.

Meanwhile, the Russian Foreign Minister Sergei Lavrov accused Kiev of refusing to demilitarise Shyrokyne, a village east of Mariupol that has seen some of the heaviest fighting.

“We’re alarmed by the developments in recent days, which very strongly remind us of preparations for another round of combat operations,” he said.

The news service of the self-styled rebel “Donetsk People’s Republic” said government artillery had shelled the outskirts of Donetsk, killing two civilians, and the city of Horlivka, where three civilians died. Rebel-held Horlivka is just north of Donetsk.

Under the ceasefire, signed in the Belarusian capital Minsk, both sides were supposed to pull back their heavy weapons. But they accuse each other of reneging on the agreement.

At the end of last month a senior UN official, Cecile Pouilly, said nearly 7,000 people had been killed in eastern Ukraine since fighting erupted there in mid-April 2014. She said more than 17,000 had been injured in the conflict.