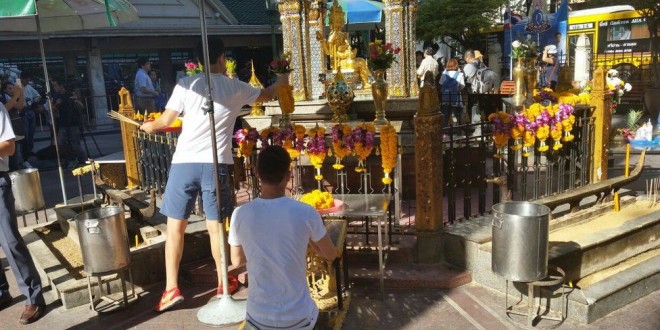 The shrine in Bangkok which was hit by a deadly explosion on Monday reopened to the public on Wednesday.

At least 20 people died and scores were injured in the attack on the Erawan Shrine, a Hindu site which is also popular with Thai Buddhists.

Thai police say the main suspect is a young man seen entering the shrine with a backpack then leaving without it.

Prime Minister Prayuth Chan-ocha has said the incident was the worst ever attack on Thailand.

In a separate attack on Tuesday, an explosive device was thrown at a pier in Bangkok. No-one was hurt, but the authorities have not ruled out a link between the incidents.

National police spokesperson Prawut Thawornsiri said on Wednesday that police were also looking for accomplices of the main suspect.

“These types of attacks are not usually planned by one person alone,” he said, according to Reuters news agency.

The shrine reopened at about 08:00 local time (01:00 GMT), with a handful of people arriving to place flowers or light incense in front of the slightly damaged statue of the Hindu god Brahma.

A BBC reporter at the scene says there appears to be low security in place, with the public free to walk in unchecked. She says the last human remains were only cleared from the site earlier on Wednesday.

The shrine was reopened 34 hours after the blast. The aim of the authorities is to say “business as usual” so the seat of the blast has been repaired, the fresh concrete still wet in the morning sun as worshippers entered a short distance away.

One man who had come from Malaysia told the BBC he was there, firstly, to remember the people who died but also to give thanks for a decision of fate which saved him.

He and his wife were going to the shrine at the hour of the blast but decided at the last moment to postpone their visit. There are many such fateful choices which people made in this city – for good and ill.

Most of the victims of Monday’s attack were Thai, but nationals from China, Hong Kong, the UK, Indonesia, Malaysia and Singapore were among the foreigners killed.

No-one has yet claimed responsibility.

Maj Gen Weerachoon Sukhontapatipak, a spokesman in the military government, earlier told the BBC that the authorities were “quite close” to identifying the suspect caught on CCTV at the shrine.

The man is seen carefully and deliberately removing his backpack inside the shrine – at the spot the bomb went off – then getting up without it and immediately leaving.

Maj Gen Sukhontapatipak said no motive was being ruled out, but that the bomber did not appear to be Thai and the character of the bombing was “quite different” from previous bombings by Islamist separatists in southern Thailand.

Speaking in a television address on Tuesday evening, Mr Prayuth said the attack showed that Thailand “still has a person or a group of people with hostility to the nation operating actively”.

“They may be doing it for a political motive or to undermine the economy or tourism or for other reasons,” he said, according to the Bangkok Post.

He also warned against speculation on possible perpetrators, saying it could cause panic or mislead the investigation.