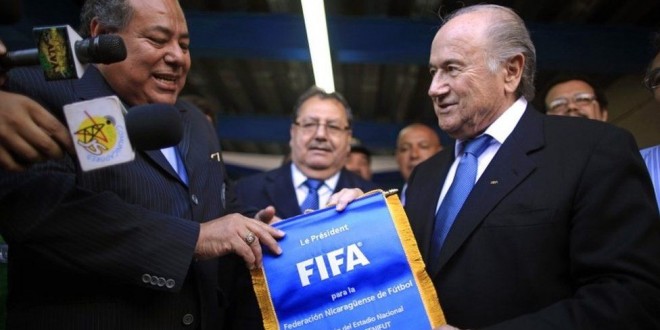 He was one of seven senior Fifa officials detained in Switzerland in May over corruption allegations.

Mr Rocha, who is a Nicaraguan national, last week agreed to be extradited to his home country.

He is still in detention in Switzerland and can only be extradited if the US, which has also charged him, agrees.

Swiss justice officials said that in order for Mr Rocha to be taken to Nicaragua, the US would have to waive its extradition request, which predates the Nicaraguan one.

Prosecutors in Nicaragua said they had evidence suggesting Mr Rocha received a $100,000 (£64,000) kickback from a company with which he had signed a broadcast rights agreement.

Mr Rocha is one of 14 current and former Fifa officials and associates indicted by the US authorities on charges of “rampant, systemic, and deep-rooted” corruption.

The US Department of Justice said that the corruption was planned in the US, and that American banks were used to transfer money.

The US investigation was initially sparked by the bidding process for the Russia 2018 and Qatar 2022 World Cups, but was widened to look back at the dealings of world football’s governing body over the past 20 years.

Mr Rocha was Fifa’s development officer from 2012 and before that served on Nicaragua’s Olympic Committee.

So far, only one of those arrested in Switzerland has been extradited to the US.

Fifa Vice-President Jeffrey Webb pleaded not guilty to accepting bribes worth millions of dollars in connection with the sale of marketing rights.

The remaining officials wanted by the US have so far not agreed to be extradited.

They are all from Latin America or from the Concacaf federation which covers North America and the Caribbean.