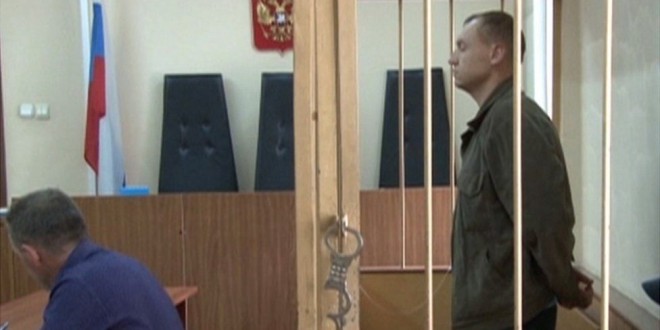 A court in Russia has sentenced Estonian security official Eston Kohver to 15 years in prison for espionage and other charges.

Kohver was detained at the Russian border on last September in a case that provoked a diplomatic row.

Estonia and the EU insist the officer was abducted on Estonian soil. Kohver says he is not guilty.

Russia’s domestic security service, the FSB, said he was on a “spying operation” on Russian territory.

After his arrest for spying near the Luhamaa border checkpoint on 5 September, the security official was charged with other crimes including smuggling arms and illegally crossing the Russian state border, according to Interfax news agency.

Prosecutors in Rostov-on-Don in southern Russia have called for Mr Sentsov to be jailed for 23 years, on charges of organising a terrorist group and planning terrorist attacks in Crimea.

Film-makers including Wim Wenders, Stephen Daldry, Bertrand Tavernier and Andrzej Wajda appealed on Tuesday for his immediate release, pointing out that the key witness had retracted his testimony because it was given under duress.

“The staged court case that formed a verdict suitable for the Russian authorities has nothing to do with a fair trial,” he said in a statement.

Estonia denies Kohver was operating as a spy and says he had been investigating smuggling operations involving Russian officials.

The dispute comes amid heightened tensions between Estonia and Russia.

In 2004, the Baltic state joined Nato and the EU. Both bodies accuse Russia of directly helping separatists in eastern Ukraine with regular troops and heavy weapons. Russia denies the claims.

In a statement, EU foreign policy chief Federica Mogherini called on Russia to release Eston Kohver, saying he had been been deprived of the right to a fair trial “from the very beginning”.

There was no public hearing of the case, the Estonian consul was not allowed to be present at the hearings and Kohver was deprived of adequate legal aid, she said.

Kohver is expected to be swapped for one of the Russian spies held in Estonia, according to Estonia’s public radio.