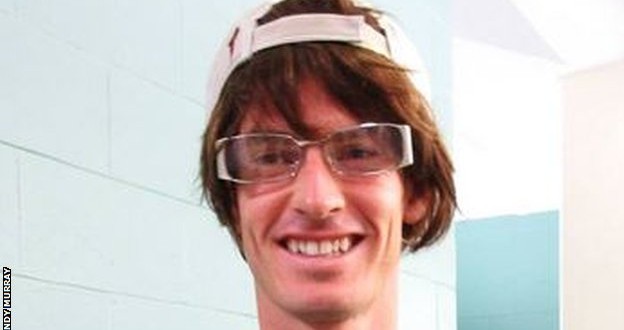 He is more used to serving up aces than desserts but Andy Murray tried his hand at selling ice-creams to trick fans in the United States.

The world number two donned a disguise of a wig and baseball cap and began working behind the counter of an ice-cream parlour in the Ohio city of Cincinnati.

But his attempts to go incognito did not fool many fans as they quickly recognised the British number one and two-time grand slam winner.

Murray’s spokesman said he was just “larking about” to see if fans would recognise him.

pictures of Murray, which also appeared

and said: “When @andy_murray is disguised and serves ice cream for you then takes off his wig to take a pic with you.”

The Scot, 28, is in the United States for the Cincinnati Masters, just days after beating world number one Novak Djokovic to win the

Mardy Fish in the second round

Murray dressed in a disguise to fool fans

And he served ice-cream at a parlour in Cincinnati

He wasn’t fooling anyone, but it was a treat for fans. Amy Boniface tweeted: “That time @andy_murray made @julie_boniface laugh.”

And he posed for pictures with delighted fans