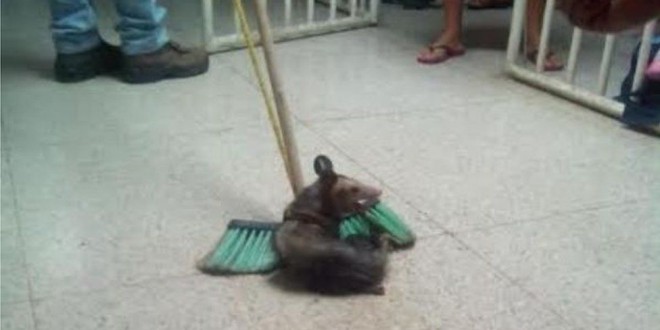 Germs spread by opossums in a Venezuelan hospital are believed to have led to the deaths of 17 babies, the country’s media say.

The deaths occurred in one week in a neo-natal unit in a hospital in the northern city of Barcelona.

Parents of the children who died say an infestation of opossums on the ward caused the deaths.

But hospital officials quoted in a Barcelona newspaper said other factors were to blame.

One newspaper, El Tiempo, obtained an image of an opossum climbing up a wall inside the unit.

Other media outlets ran an image of one of the animals clinging to a brush as it is being swept.

“My son entered without suffering any infection and the cause of his death was that: an infection,” Alejandra Salazar, the mother of a boy who died, told the Diario Metropolitano newspaper.

“We are confident that the bacteria was transmitted by this animal.”

Opossums carry a number of diseases, a number of which can be harmful to humans, including tuberculosis.

El Tiempo says investigations have now been opened and that a large amount of money had been allocated for improvements in air conditioning in the neo-natal unit.

Diario Metropolitano said one hospital official claimed the animals were not to blame. Poor diet may have been a factor, another un-named official told the newspaper.

El Norte, another Barcelona newspaper, said that 10 babies had died in only one night. It also highlighted major concerns about cleanliness in the hospital.