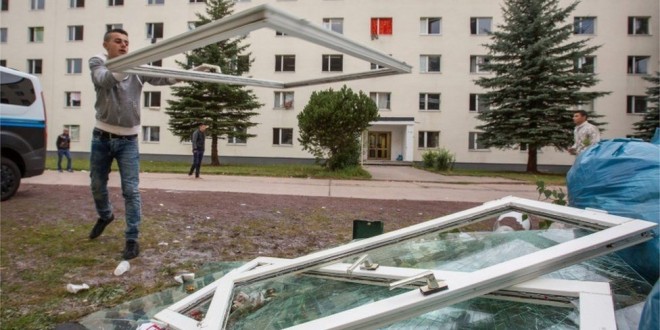 An argument over a Koran that erupted at a shelter in central Germany has led to violence in which 11 refugees and six police were injured.

Twenty people tried to lynch an Afghan man of 25 after he tore pages from the Koran and threw them in a toilet, according to reports in the town of Suhl.

When police tried to intervene they also came under attack.

Germany says it is expecting 800,000 people to claim asylum this year.

More than half the numbers of migrants arriving on Europe’s borders are heading there, and Germany is also facing a large influx of people from Balkan states such as Albania and Kosovo.

Wednesday night’s violence took place at an overcrowded refugee shelter in which some 1,800 people were being housed. The house was meant to hold only 1,200 – an indication of the difficulties faced by Germany’s authorities.

Police were pelted with stones and concrete blocks as they tried to calm the situation.

The migration minister in the central state of Thuringia, Dieter Lauinger, told reporters that the violence had nothing to do with overcrowding at the shelter.

He said he understood that emotions ran high when different groups came into contact with each other, but there was no excuse at all for “anyone tearing up a Koran and throwing it in the toilet”.

The Afghan man at the centre of the riot was reportedly being protected at a police station. His religion was not disclosed.

Tensions over the influx of asylum seekers in Germany have led to some attacks on hostels in recent months.

Earlier this week, supporters of a right-wing movement called Thuegida marched through Suhl as part of a campaign against “Islamisation”.