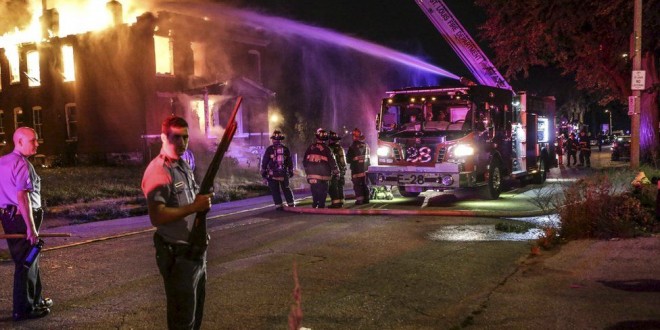 Protests in St Louis after shooting

Nine people have been arrested amid protests in Missouri after St Louis police fatally shot a 18-year-old black man who they say pointed a gun at them.

Police used tear gas after protesters threw glass bottles and blocked a motorway on Wednesday night. A vacant building was set on fire nearby.

Mansur Ball-Bey was killed after officers served a search warrant on a home in North St Louis.

As he fled, Ball-Bey pointed a gun at officers and was killed, police said.

North St Louis is about eight miles (13km) from Ferguson, Missouri, where a white police officer killed an unarmed black man in August 2014, setting off weeks of unrest and protests.

Police shot a man in Ferguson on 9 August as protesters marked the one-year anniversary of the death of Michael Brown.

St Louis Police Chief Sam Dotson said four guns and crack cocaine were recovered inside or near the home.

The officers were unharmed and police are still looking for a second suspect.

The two officers who fired at Ball-Bey were placed on leave pending an investigation.

About 150 people gathered near the scene of the shooting on Wednesday, protesting the use of deadly force.

“Another youth down by the hands of police,” one neighbour said to media covering the protest. “What could have been done different to de-escalate rather than escalate?”