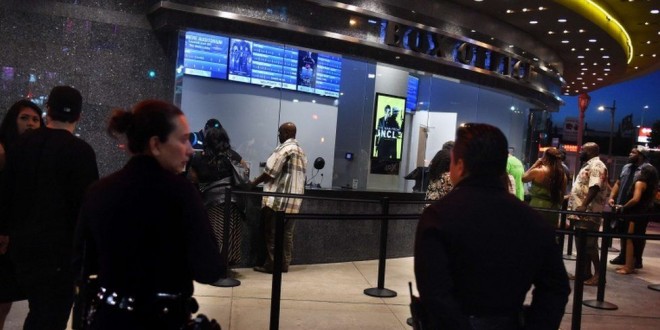 One of America’s largest cinema chains, Regal, is now searching bags of film-goers following several attacks on movie theatres across the US.

Regal’s updated policy says it wants customers and staff “to feel comfortable and safe” in its cinemas.

It is not clear when it began, but reports say some people had their bags checked at some of the company’s 570 cinemas this week.

Earlier this month, a man attacked cinema-goers in Tennessee with an axe.

He was shot dead by Nashville police, but no-one else was killed.

“Security issues have become a daily part of our lives in America,” Regal Entertainment Group’s admission policy now reads on the company’s website. The company has not yet commented publicly on the new regulations.

“To ensure the safety of our guests and employees, backpacks and bags of any kind are subject to inspection prior to admission,” it continues.

Last week, police were deployed outside the Regal cinema in Los Angeles ahead of the premiere of the film Straight Outta Compton.

Two weeks before the Nashville attack, two people were shot dead and nine others injured when a man attacked a cinema in Lafayette, Louisiana.

The change in policy also comes the same month Colorado theatre killer, James Holmes, was given a life sentence for killing 12 people and injuring 70 others at a screening of a Batman film in 2012.