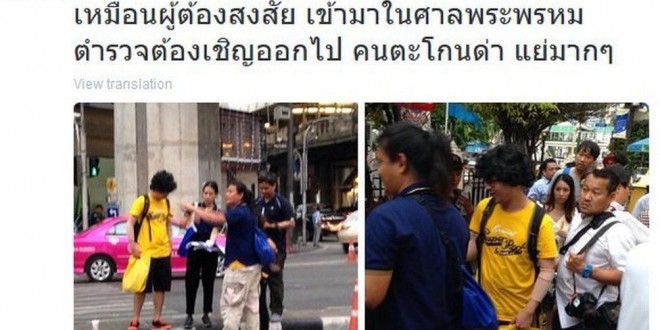 A Thai television station has apologised for re-enacting the Bangkok blast at the Erawan shrine with a staff member dressed as the main suspect.

The re-enactment on Thursday evening sparked outrage among Thais at the shrine and online.

Executives at Nation TV have since acknowledged it was insensitive and disrespectful to the dead.

The bomb blast on Monday evening killed 20 people and injured scores more. Police are hunting for the suspect.

Nation TV presenters read out an apology on television on Thursday night.

An evening news editor with the station said in a statement posted online (in Thai) a team was sent out to re-enact the bombing at around 18:00 local time on Thursday (11:00 GMT Thursday).

A member of staff was dressed up to look like the suspect, the statement said. The team stopped filming when people at the scene “expressed frustration” at them.

The president of Nation Broadcasting Corporation Adisak Limprungpatanakij said separately that the plan was made “without consideration for the sensitivity of the public and with disrespect for the dead,” reported AP news agency.

He added that the station would consider disciplining those responsible.

Twitter user BoyOfHeaven posted pictures on Thursday evening which appeared to show the Nation TV staff during the re-enactment.

“There is an unidentified TV crew, they have someone dressed as the suspect in the shrine. Police have asked him to leave the scene and people are shouting ‘terrible’ at him,” he said in a tweet that was later shared thousands of times online.

The incident was the second controversy involving identification of the suspect in the days following the blast.

Australian actor Sunny Burns, who teaches English in Bangkok, was mistaken as the main suspect earlier this week after a Thai journalist pointed out that Mr Burns resembled him.

Mr Burns said he later found that private details including his home address were being spread online.

He went to the police to give a statement on Tuesday, and posted a picture of himself at the station “to share any evidence in case something went wrong”, he said. He later posted CCTV video stills showing he was at his apartment building at the time of the blast.

Thai police have released a sketch of the suspect and say that he is a foreigner.

Two other men earlier identified as suspects in the bombing have since been cleared of involvement.