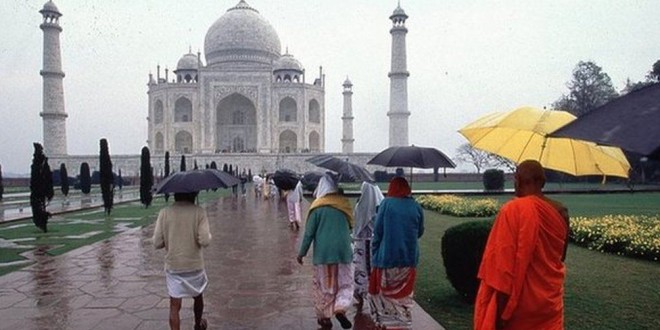 The Indian authorities have ordered an inquiry into why a chandelier hanging at the entrance of the country’s most famous monument, the Taj Mahal, crashed to the ground earlier this week.

Eye-witnesses say an employee was cleaning the two-metre high chandelier when it came down on Wednesday.

The crash scattered tourists, but no-one was injured in the accident.

Tour guides have accused those responsible for maintaining the site of negligence.

The 60kg chandelier normally hangs under the Royal Gate, the outer gate through which the Taj Mahal is first viewed.

Experts from the Archaeological Survey of Indian (ASI) said the fall was probably caused by general wear and tear.

“The copper chandelier was hanging by a chain. I am personally conducting a probe into it,” said Dr Bhuwan Vikram Singh, superintending archaeologist.

“It would only be decided after analysing the condition of the jhumar (chandelier) whether it should be fixed again or not,” he said.

The chandelier was given as a gift to India in 1905 by the former British Viceroy, Lord Curzon, who ordered the restoration of the Taj Mahal after it was defaced by British soldiers during the 1857 Indian rebellion.