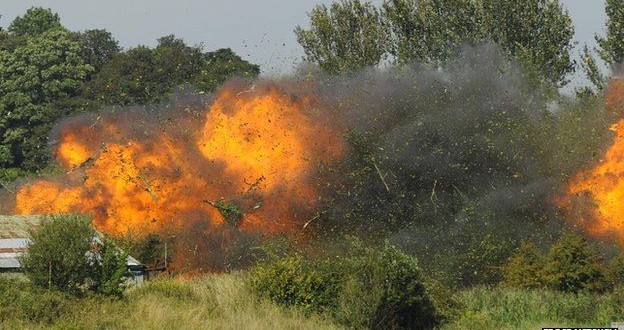 Plane crashes into cars at airshow

A Hawker Hunter plane has crashed into several vehicles after coming down at Shoreham Airshow in West Sussex.

Sussex Police said there are several casualties, but could not give details on their condition.

The plane crashed into vehicles on the nearby A27. The road is likely to remain closed for several hours.

Eyewitness Stephen Jones said the plane was performing a loop but did not complete the manoeuvre and crashed. Police said it ended up in a bush.

He said: “The aeroplane involved is a Hawker Hunter T mark 7. And he’d just begun his flying display.

Read the latest updates on the crash

“And he flew straight into the ground either on or very close to the A27, which runs past the airport.”

One eyewitness, tweeting as Jon B, said: “It (the plane) turned from the north by Lancing College, went to go low towards the airfield and went behind some trees below where I was.

“Then there was a crunch sound and a ball of flames and thick black smoke came up from the ground.”

I’m standing on the middle of the A27 and it’s deserted.

The police are taking no chances whatsoever. I’ve been asked to move back in case of any further explosions.

I’ve been speaking to people and they are absolutely stunned. The plane seems to have stalled mid manoeuvre and came crashing down on the A27.

The acrid smell and thick black smoke has just been fanning across the area and the skies are completely quiet.

Shoreham Airshow also tweeted: “There has been a major incident outside the airfield boundary.

“The emergency services are responding. Updates will follow when available.”

In a statement police said: “At about 1.20pm the aircraft hit several cars on the A27 just to the north of Shoreham Airport, where an air display is taking place.

“The aircraft ended up in a bush. There have been several casualties but we have no further information on these at the moment.”

It is the second incident at the Shoreham Airshow in recent years. In September 2007 James Bond stuntman Brian Brown, 49, died when he crashed a World War Two Hurricane after carrying out an unplanned barrel roll at a re-enactment of the Battle of Britain.

The Hawker Hunter was a mainstay of the RAF through the 1950s and early 1960s.

First flown in 1951, the single-seat plane was used as a fighter, fighter-bomber for reconnaissance and for aerobatics.

There was also a two-seat trainer version, which served with many other air forces. Two-seater variants are still used by the RAF for training.

The Hunter Hawker was deployed in major operations such as Malaya and Suez.

The plane was also flown by an RAF display team dubbed the “Black Arrows”.

Are you in area? Did you witness the crash? You can email [email protected] with your story.