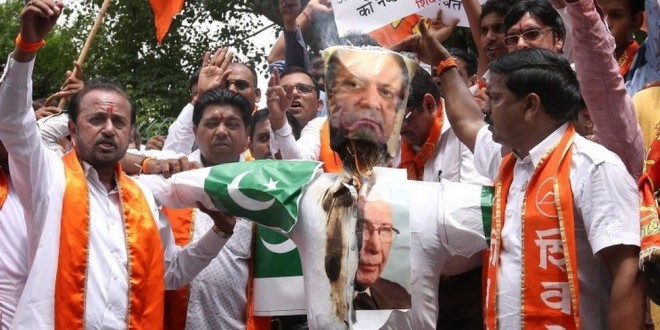 Planned high-level talks between India and Pakistan have been cancelled hours before they were due to start on Sunday, amid mutual recriminations.

Pakistan said that it could not accept India’s “preconditions” for the talks, while India denied that it was to blame.

Delhi said that it was only willing to discuss “terrorism-related issues” at the talks and nothing else.

Pakistan argued that talks purely on this basis would be futile.

Analysts say that many in India believe that PM Narendra Modi’s government appears to have recognised that a quest for durable peace with Pakistan is a non-starter.

“We have come to the conclusion that the proposed National Security Advisers (NSA) level talks between the two countries would not serve any purpose,” Pakistan’s foreign ministry said late on Saturday.

“It is not reasonable for India to assume the right to decide unilaterally that from now onwards, other issues will [only] be discussed after terrorism has been discussed and eliminated,” a statement from Pakistan’s foreign ministry said.

India gave Pakistan until midnight on Saturday to agree to restrict the talks solely about militancy following after a row over Pakistan’s plan to meet Kashmiri separatist leaders and widen the scope of the talks.

When asked what would happen if Pakistan did not agree to India’s demands, Indian Foreign Minister Sushma Swaraj replied: “Then talks won’t happen.”

Correspondents say that while it appears both sides are provoking one another to cancel the talks, Mr Modi is a pragmatist and knows his agenda of enhancing regional co-operation in South Asia will remain unfulfilled without a thaw in India-Pakistan tensions.

Just last month, he accepted an invitation from his Pakistani counterpart Nawaz Sharif to attend a regional summit in Islamabad next year.

Pakistan also reiterated that there could not be any dialogue with India unless the issue of Kashmir was on the agenda.

Kashmir, claimed by both countries in its entirety, has been a flashpoint for more than 60 years. A ceasefire agreed in 2003 remains in place, but the neighbours often accuse each other of violating it.