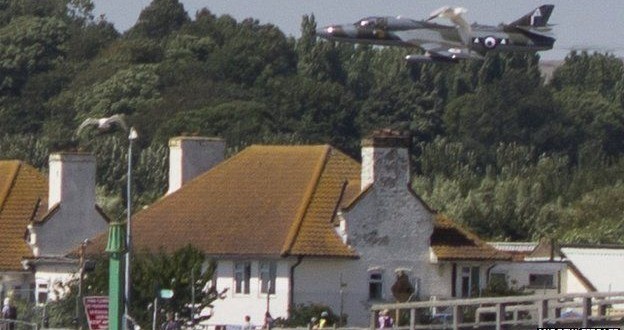 The pilot of a jet which crashed into vehicles during Shoreham Airshow, leaving seven people dead, is in a critical condition, police have said.

It was possible more bodies could be found as searches continue, Supt Jane Derrick of Sussex Police also said.

The pilot was taken by air ambulance to the Royal Sussex County Hospital and is “fighting for his life”, she added.

The Hawker Hunter jet crashed into the A27 in West Sussex at 13:20 BST as it was completing a loop manoeuvre.

“It is possible that tonight and tomorrow we are going to find more bodies at the scene,” said Supt Derrick.

She said Sussex Police had received about 40 calls from people concerned their relatives may have died or been injured in the crash.

A further 14 people have been treated for minor injuries, one of whom this evening was released from hospital.

The A27 is currently shut in both directions and is not expected to re-open for the “next couple of days”, police added.

Supt Derrick also apologised to drivers who were made to wait at the airfield while congestion cleared.

Earlier, Prime Minister David Cameron sent his “heartfelt condolences” to the families of those who died in the crash.

Eyewitnesses have been recalling seeing the plane fall and the subsequent explosions.

Archie Tipple, a spectator at the event, said the mood changed very quickly when people realised what happened.

“..but he was coming in a little bit low and I was still photographing it as it came down and then all of a sudden you just knew what was coming, and it just immediately changed, the atmosphere, from a festive one to something quite sombre,” he said.

“It just didn’t seem to have enough speed to come out of the loop, instead of powering out it dropped too fast and hit the ground.

“There was a massive fireball and an awful lot of smoke. Afterwards there was a stunned silence.”

Tim Loughton MP, who represents East Worthing and Shoreham, tweeted: “Tragic news that there have been fatalities at the Shoreham Air Show crash and our thoughts and prayers must be with the families and casualties.”

It is the second incident at the Shoreham Airshow, one of the premier airshows in the UK, in recent years.

In September 2007 James Bond stuntman Brian Brown, 49, died when he crashed a World War Two Hurricane after carrying out an unplanned barrel roll at a re-enactment of the Battle of Britain.

The Hawker Hunter was a mainstay of the RAF through the 1950s and early 1960s.

First flown in 1951, the single-seat plane was used as a fighter, fighter-bomber for reconnaissance and for aerobatics.

There was also a two-seat trainer version, which served with many other air forces. Two-seater variants are still used by the RAF for training.

The Hawker Hunter was deployed in major operations such as Malaya and Suez.

The plane was also flown by an RAF display team dubbed the “Black Arrows”.