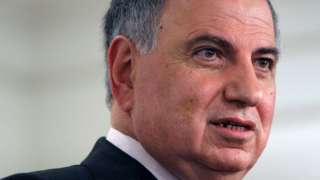 Ahmed Chalabi, the Iraqi politician most associated with persuading the US to invade in 2003, has died aged 71.

Officials said he was found dead at his home in Baghdad in his bed, apparently having suffered a heart attack.

The secular Shia was once championed by the US as a potential leader of Iraq.

But they fell out after the invasion turned into a bloody occupation, and information which he had provided about Saddam Hussein’s weapons of mass destruction capability was discredited.

Mr Chalabi was also in charge of the commission that stripped members of Saddam’s Baath party of their positions and is seen as one of the causes of the current sectarian strife in Iraq.

Ahmed Chalabi was one of the most controversial and colourful figures on the Iraqi political scene.

He never regretted his role in persuading – some, including himself, would say tricking – the Americans into invading Iraq and toppling Saddam Hussein, his hated enemy, in 2003.

He returned to Baghdad after that from exile in the UK and US, and was ubiquitous in Iraqi politics – a thoroughly modern man of great charm and influence.

He came from a big Shia family, but enjoyed strong relations with all political factions in both the Arab and Kurdish communities as well as with many outside players, including Iran and, despite everything, parts of the American establishment.

He was a leading contender for the job of Iraqi prime minister last year, but never managed fully to throw off the legacy of his role in 2003, or the fallout from his stewardship of the Petra Bank in Jordan, which collapsed in the early 1990s.

He will be missed in Baghdad as one of the few leaders who could build bridges between the feuding factions.