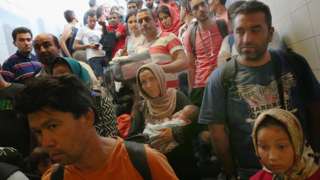 The number of people seeking asylum in Germany this year will be as high as 1.5 million – almost double the previous estimate, German media report.

The German government has not confirmed the new estimate, which comes from an internal official report cited by popular daily Bild.

The report warns that services helping refugees will not be able to cope.

Separately, a centre-right regional minister put the expected total at 1.2-1.5 million for this year.

The German government previously estimated the number of asylum claims this year to reach 800,000 to one million in total.

Many are refugees fleeing the wars in Syria, Iraq and Afghanistan, but there are also many economic migrants from the Balkans, Asia and Africa.

UN High Commissioner for Refugees Antonio Guterres has warned that Europe, in dealing with the migration crisis, is engaged in a “battle of compassion versus fear, and of tolerance versus xenophobia”.

Speaking in Geneva, he said the world was facing the highest levels of forced displacement in recorded history and the principle of asylum must remain sacrosanct.

He urged Europe to defend “its founding values of tolerance and openness by welcoming refugees of all religions”.

The leaders of Hungary and Slovakia have said the influx of Muslims is a challenge to Europe’s “Christian” identity.

The Turkish President, Recep Tayyip Erdogan, is to meet EU leaders in Brussels shortly to discuss the Syria crisis, which has fuelled an exodus of Syrians to the EU via Turkey.

Greek islands near the Turkish coast are overburdened with migrants, many of them Syrians determined to reach Germany. The crisis has strained EU relations with Turkey, a mainly Muslim country.

On Sunday several thousand Germans opposed to mass immigration demonstrated in two eastern towns – Plauen and Sebnitz – after a call to action by the anti-Islamic Pegida movement.

Pegida (Patriotic Europeans Against Islamisation of the West) has staged regular anti-immigration marches across Germany.

The migrant influx is stretching resources in many German cities, including Hamburg, where empty commercial properties can now be seized in order to house migrants.

There is growing political pressure on German Chancellor Angela Merkel, who continues to defend her open-door refugee policy. Germany can manage, the chancellor insisted at the weekend.

But many politicians – including her conservative Bavarian CSU allies and various EU partners – have criticised the policy.

The Interior Minister of Mecklenburg-West Pomerania region, Lorenz Caffier, gave an estimate of 1.2-1.5 million asylum claims for this year.

But federal Interior Minister Thomas de Maiziere said it was very hard to give accurate figures. Some refugees either avoided registration or moved elsewhere after being registered in one place, he said.

A note on terminology: The BBC uses the term migrant to refer to all people on the move who have yet to complete the legal process of claiming asylum. This group includes people fleeing war-torn countries such as Syria, who are likely to be granted refugee status, as well as people who are seeking jobs and better lives, who governments are likely to rule are economic migrants.