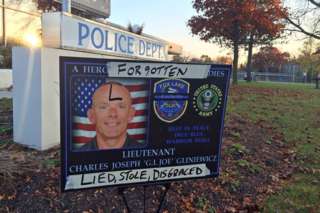 An Illinois police officer who staged his suicide to look like he was murdered also attempted to hire a hitman, officials say.

Charles Gliniewicz sought to have a town administrator killed because he believed she would expose his financial misconduct and theft.

In September, he radioed to say he was chasing three suspects and was later found struck by two gunshots.

A huge manhunt followed but his death was this week ruled a suicide.

Officers from about 50 Chicago-area police departments scoured the area for the three men for days to no avail.

In the wake of the incident, he was heralded as a hero who died while on the job – fuelling debate about the use of force by police and the dangers they face while on the job.

Those sentiments have now turned into a sense of betrayal.

The 52-year-old officer, an army veteran who went by the nickname “GI Joe”, was hit by two bullets.

The first hit his bullet-proof vest with what an official said was the force of a “sledgehammer”. The other punctured his upper chest.

Earlier this week, investigators revealed that the officer staged his death to look like a murder when it was in fact a suicide.

The lead investigator in the matter said that Gliniewicz had been stealing and laundering money from the police department’s youth development programme, which he led.

The stolen money was used for mortgage payments, travel, personal purchases and more.

On Thursday it was revealed that Gliniewicz had asked a third-party to set up a meeting with a “high-ranking gang member to put a hit on” village administrator Anne Marrin.

It is also believed that he may have planned to plant cocaine on Ms Marrin in order to discredit her, if she were to reveal his misconduct.

The recent release of his personnel records has revealed a number of disciplinary issues while the officer was on the force.

The issues ranged from numerous suspensions to complaints that he intimidated dispatches with guns to allegations of sexual harassment.

In one incident, the officer reported his own vehicle stolen the day after a friend found him passed out inside and took him home.

The files also showed several commendations for good work earlier in his career – which began in 1985.marrin

According to the Associated Press news agency, investigators are now investigating the late officer’s wife and son in connection to the misconduct.