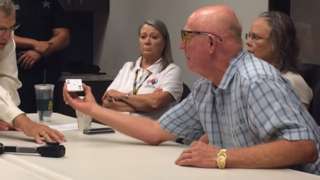 Polling, rather than playing, cards are supposed to decide elections. But when the vote for the mayor of Bradenton Beach, Florida ended in a dead heat this week, democracy was trumped by a game of chance.

With both candidates tied on 195 votes each, Florida law called for the winner to be determined by lot – in this case, a deck of cards.

A timely Ace of Clubs installed challenger William Shearon as the new mayor and booted the incumbent, Jack Clark, out of office.

“The voters voted, and the man up above made the decision,” said Mr Shearon.

The state of Florida is not alone in turning to chance – 35 US states require the drawing of lots to break a tie. And the method is usually left up to the returning officer.

As Mike Bennett, the county election supervisor in this case, pointed out: “We could’ve flipped a coin, we’ve could’ve drawn straws, I supposed we could’ve play that paper rock and scissors or roll a dice. We felt the easiest one to do with less confusion was to go ahead and cut a deck of cards.”

In the UK, a pack of cards decided the winner of one tie at the 2011 local council elections at Great Yarmouth in Norfolk, in the Labour candidate’s favour.

The same year, Labour took control of Bury Council after the Conservative candidate in Ramsbottom drew the short straw – or short cable tie hidden in a book, in that case.

And the following year, the Tories regained Runnymede Council after names were drawn from a hat.

Europeans take a slightly more unusual approach to settling ties. If the vote for president of the European Parliament is still level after a series of additional ballots, the older candidate wins.