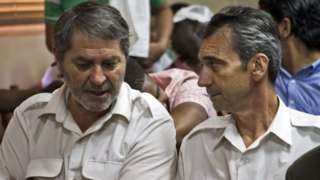 Two French pilots who fled the Dominican Republic last week have been arrested by French police in Lyon.

Pascal Fauret and Bruno Odos were convicted of drug smuggling by a Dominican court earlier this year and sentenced to 20 years in prison.

They had been placed under judicial supervision while they were appealing against the sentence.

They reportedly escaped by boat to the French Antilles and from there by plane to France.

Their lawyer said their arrest was “unnecessary” as the two men had placed themselves at the investigating judge’s disposal.

Last week the lawyer said that the two pilots were intent on clearing their name.

They were arrested in the Dominican resort of Punta Cana in 2013 after police found 26 suitcases on their plane stuffed with 680kg (1,500lb) of cocaine.

They, and two other Frenchmen arrested with them, have always maintained their innocence.

The Dominican Republic has asked for their extradition, but legal experts said that was unlikely to happen.