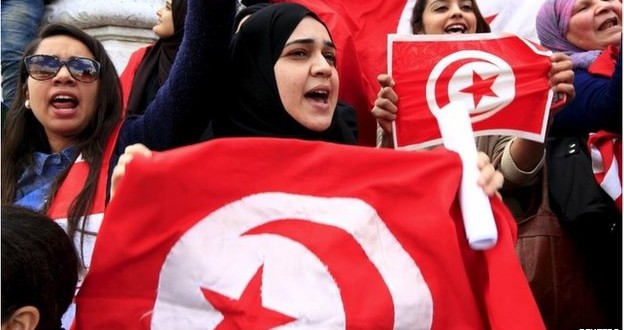 Tunisia’s president has urged Tunisians to unite to fight terrorism, two days after an attack on the Bardo museum in the capital Tunis killed 24 people, mostly foreign tourists.

“We won’t win if we don’t stand together,” Beji Caid Essebsi said in a national address marking 59 years of Tunisia’s independence from France.

Islamic State has said it was behind the attack on the museum, which is next to the country’s parliament.

Nine people have since been arrested.

The presidency said four of those arrested were directly linked to the attack and five had “ties to the cell” that carried out the attack.

Many of those who died and were injured were tourists from two cruise ships which have now have arrived in Spanish ports.

The death toll went up to 24 on Friday.

At the scene: BBC’s Naveena Kottoor in Tunis

There were demonstrations outside the museum for a second day

It is a grim scene at Charles Nicolle hospital in central Tunis. Family members of those who died in the attack on Wednesday have been arriving at the morgue to identify and repatriate their loved ones. Some were carrying flowers and most of them were being looked after by the consular staff of their respective embassies.

The death toll has climbed to 24 now, and some victims are still being identified. At the surgical ward nearby, patients are still being treated for injuries. The French interior minister and the Tunisian president paid a visit this afternoon.

Earlier, people came to the Bardo museum to express sympathy for those who died. A group of Tunisians were holding up banners that read: “Terrorism has nothing to do with Islam or Tunisia”.

President Essebsi, who won Tunisia’s first free presidential election in December, called on Tunisians to unite “in the face of terrorism, like their forefathers did in the face of the colonisers”.

The BBC’s Aidan Lewis in Tunis says there is a strong security presence on the streets as people came into the centre of the city for an independence day concert.

Twenty one of the people killed at the Bardo museum were foreign tourists.

Belgian tourist Karin Dons said she was not at the museum at the time of the attack but heard the shootings. She said she did not realise what had happened until she returned to the ship and saw the reports on television.

“Then you realise [what] you escaped from but other people were not lucky,” she said after leaving the ship in Barcelona.

Sally Adey was among the victims

Islamic State has said it was behind the attack on the Bardo museum, in an audio message in which it praised two “knights of the caliphate”.

Tunisian security official Rafik Chelli said the gunmen – identified as Yassine Laabidi and Hatem Khachnaoui – had slipped out of Tunisia in December and received weapons training in Libya ahead of the attack.

He told the el-Hiwar el-Tounsi TV channel that authorities did not have details about where or with which group they had trained.

The men were killed as security forces stormed the museum.